In the game clash of clans, the main theme is to gain more stars to make a difference, by destroying the opponent’s village or by saving one’s clan. Town hall 10 is an amazing level with a lot of thrill and new features. The main objective of the game is to build a well strategic base that is tough for opponents to destroy. The best th10 level has some finest tactics to deal with defending and attacking. For best th10 trophy base, it is very important to gain trophies. You have to build a trophy coc base layout keeping in mind some amazing strategies.

Firstly, more section in the base means the more secure your base is. With each level, your strategies become better and better. Secondly, the upgrading of buildings is very important. Which tower you have to upgrade first matters a lot. Thirdly, the placement of towers and buildings is also very much important as every tower has a range of protection to that range the tower can protect the clan. And you don’t have to give any space between ranges, so the whole clan is secure.

Secondly, a key tip to making an effective th10 trophy base is to keep your 50% towers outside of walls so that your opponents can’t pick off those buildings. If you are thinking to have the best trophy layout, make sure that your resource towers are also secure.

This is an amazing base layout, in which the town hall is centralized with multi-inferno compartments surrounding the sections. There are more small compartments in which defense buildings are placed. In one segment of the base, TH10 archer queen alter and barbarian king alters are placed. Outside the clan, a layer of heavy army and defense building is placed with all the resource towers surrounding the whole village. In the trophy base layout, most of the time the resource towers act as defense buildings. It is because there is not much importance on resources in the best th10 trophy bases. 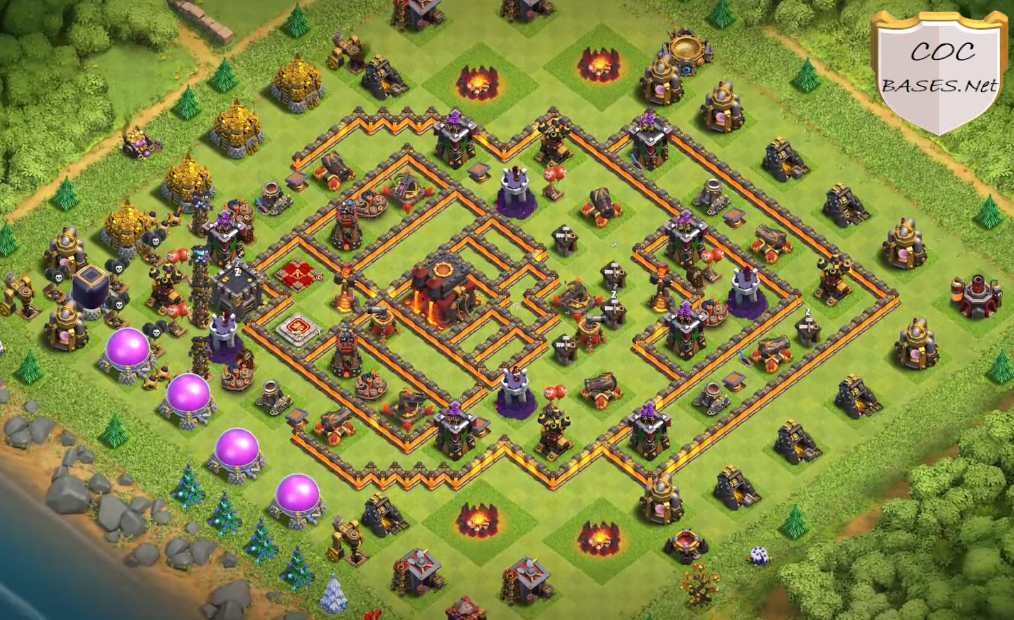 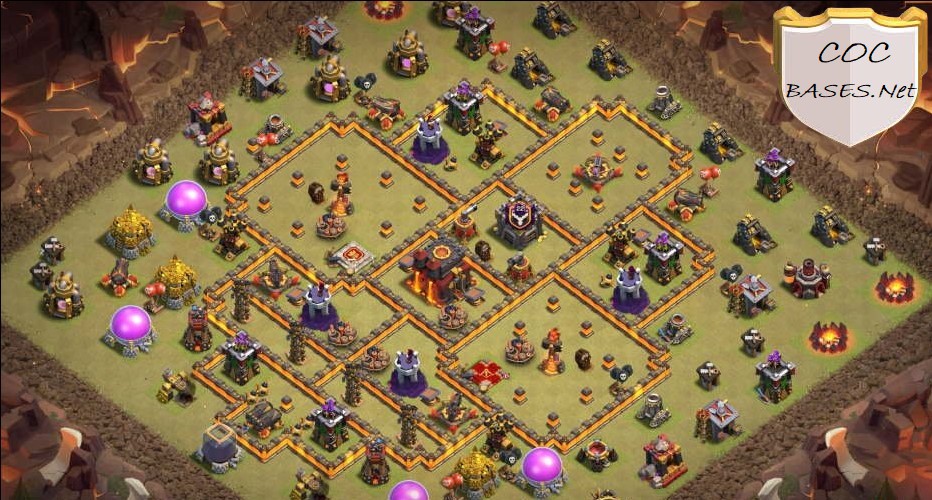 TH10 Trophy Base With Bomb Tower 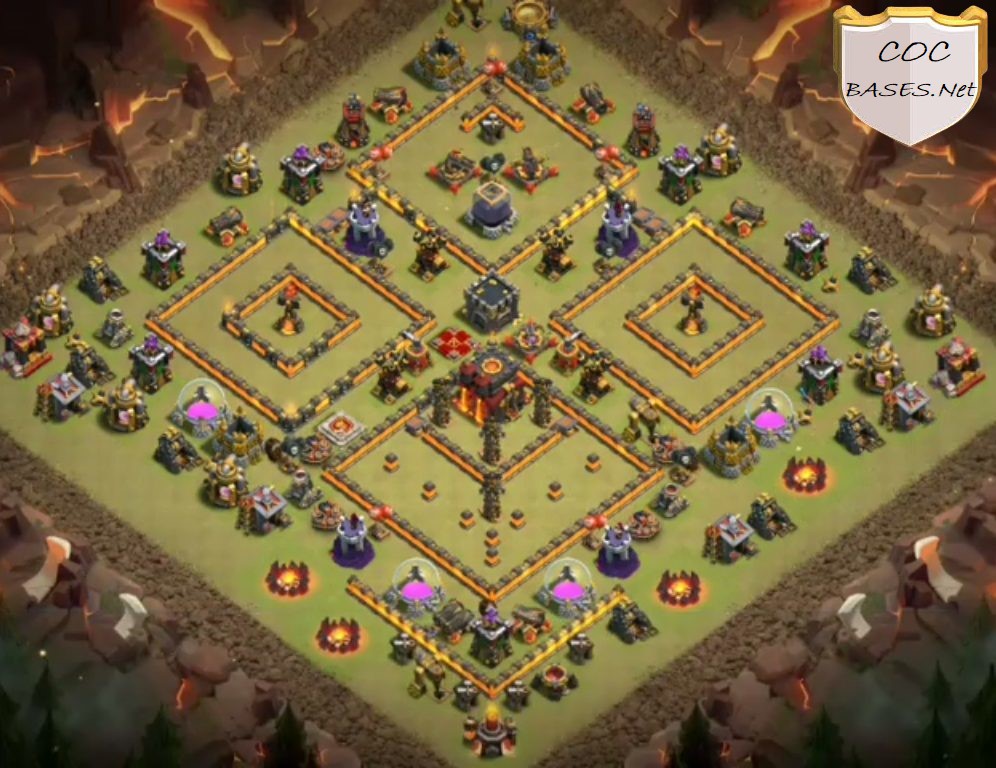 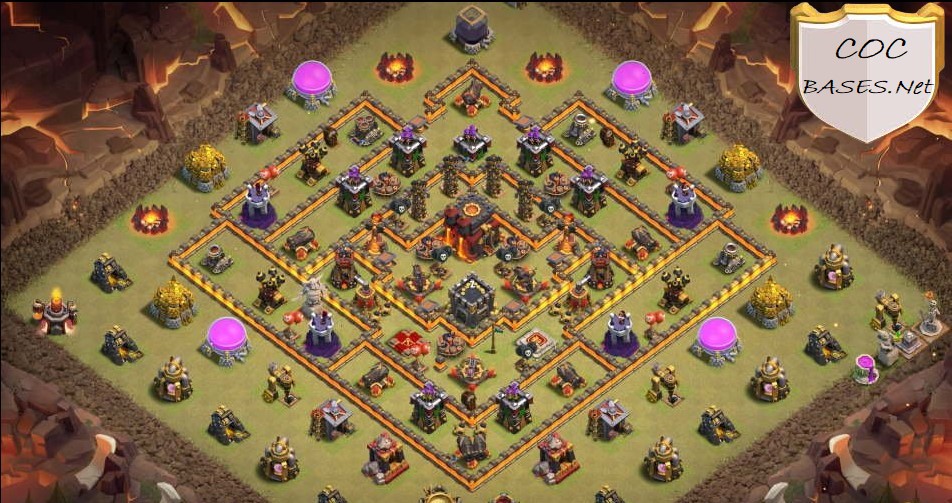 In this best th10 trophy base layout, the town hall is placed in the center with some amazing defense buildings. The center segment is surrounded by the wall, outside the wall small bombs are placed with two infernos. Then, there is a third big segment, in which resource towers, cannons, mortar, archery, air-defense towers are placed. The whole clan is surrounded by a hard wall and outside the wall again a layer of army and defense building is made. 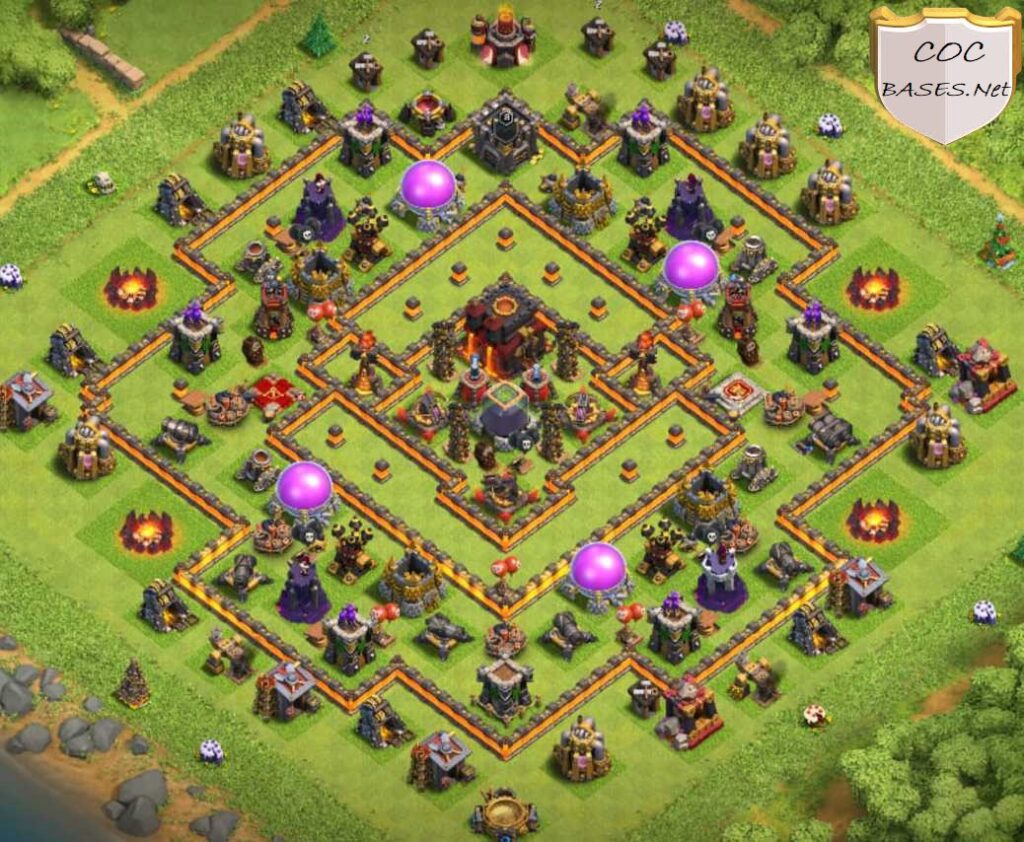 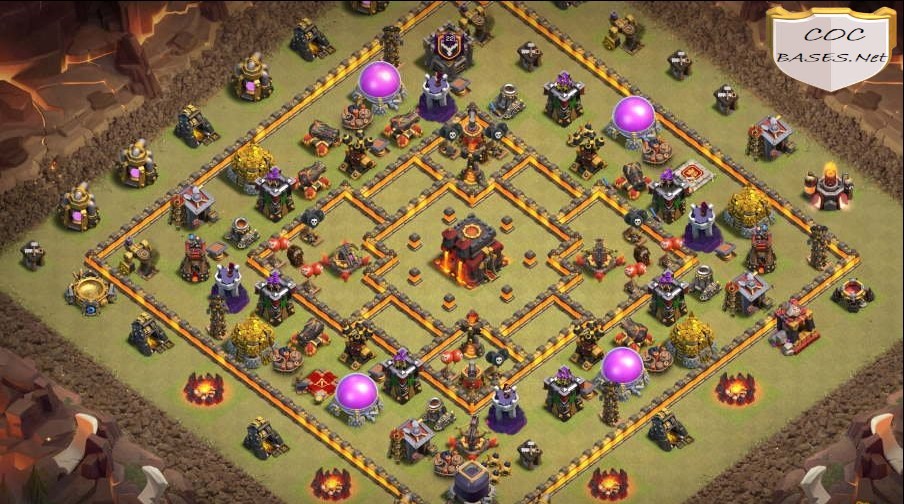 Here we have shown two amazing trophy bases that are built with a heavy army. In the first best th10 trophy bases, the town hall is centralized with the clan castle. For the protection of the central segment, some of the amazing defense buildings are placed. There is a second layer containing the small bombs. Both layers are surrounded by a molten lava wall for protection. There is a third heavy defense army layer also containing some resource buildings. That is protected by two different types of walls. 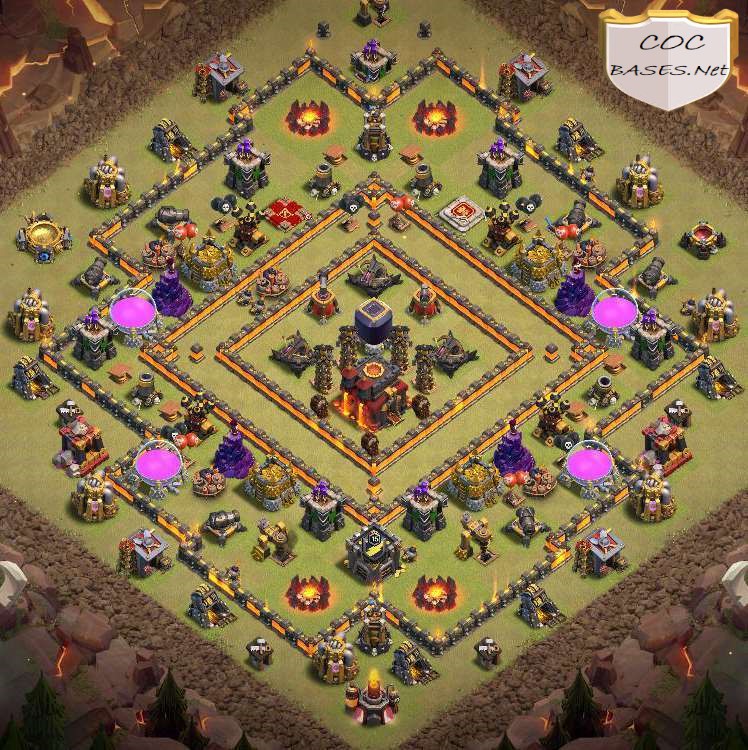 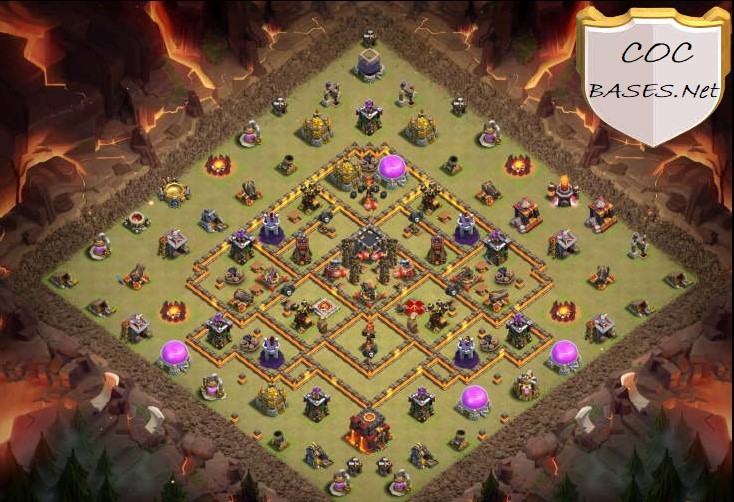 Townhall 10 Trophy Base Anti Everything

The second option has a square compartment in the middle containing a town hall protected by a wall and some defense buildings. Then there are three layers surrounding the central square segment that are equipped with defense and army buildings. The resource towers are placed outside the clan with some cannon, mortar, etc. 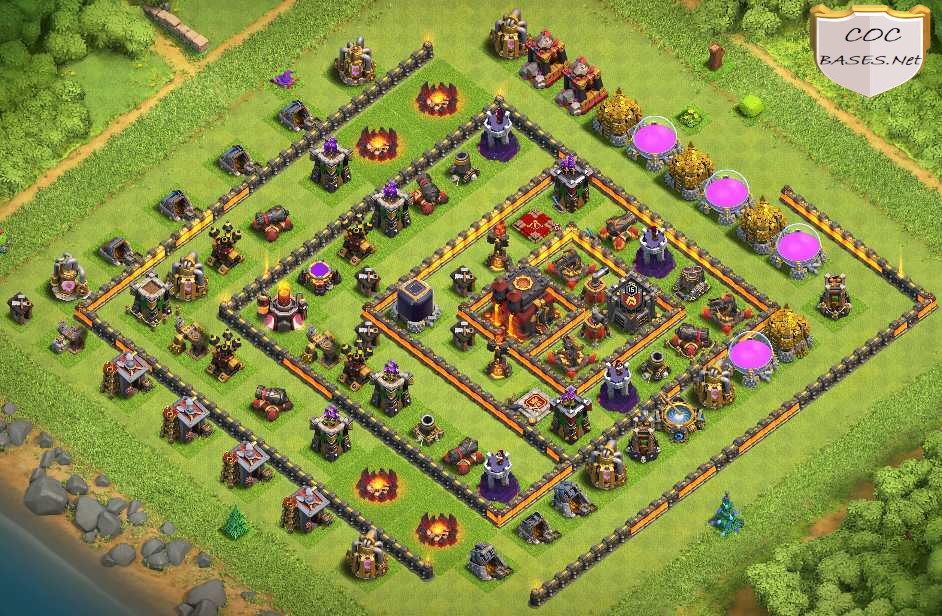 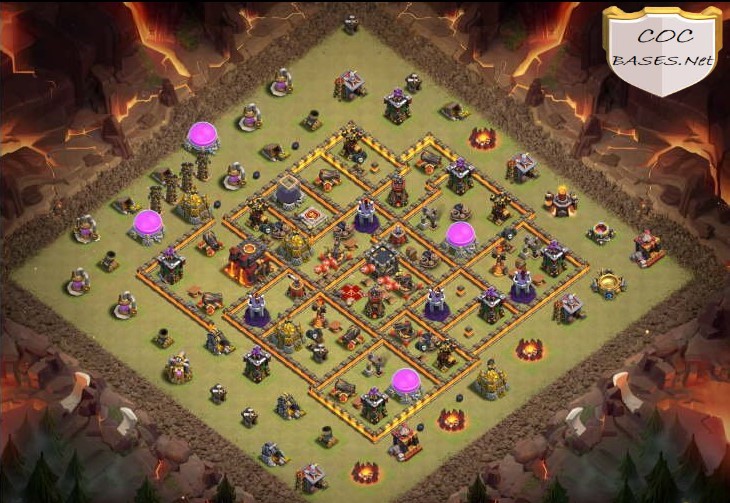 clash of clans th10 farming base