In level th8, when all the buildings, troops, walls, and heroes are fully maxed, you can upgrade to Best TH9 Hybrid Base. The town hall 9 clash of clans base is trilled and the most amazing level, which is liked by all the players. It is sometimes very hard to build the best base design for your clan. There are many options for online copy base designs, but it is not very productive.

Because if you will copy base then your base design will be the same as many other players and it will be very easy for opponents to know your strategy. At the initial stage, building your clan also seems difficult. But with help of some amazing base design strategies, it becomes easy to build the best th9 bases for your clan. To build the best th9 hybrid base for your clan, you must be aware of the main theme of this base.

The hybrid base is a combination of a farming base and war base design; which means you have to save your resources as well as the town hall. While designing the best th9 hybrid bases, keep in mind the strategies for both war and farming base.

This best th9 hybrid base is one of the most famous ones because of its amazing strategic design. One of the best things is that this base consists of many small compartments. The town is centralized with a hard wall surrounding it. As already mentioned a hybrid base is a combination of a farming base and a war base. So it is very important to save both the town hall and resource towers. The resource towers are placed inside the clan, equally distributed in different compartments. The most important resource towers are placed close to the central section. There is an outer layer of a heavy defense army protecting the whole clan. 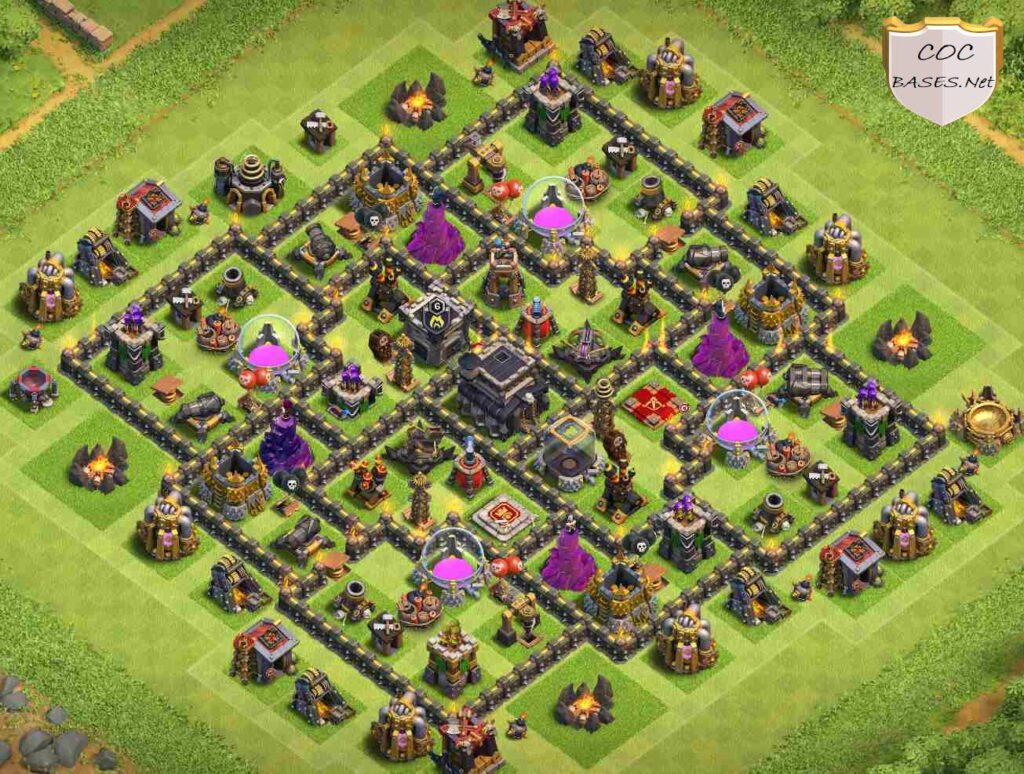 Most of the time the bases contain equal-sized square-shaped compartments, but this hybrid base layout contains different-sized sections. This is also a very amazing technique to make your base look different and more hard for your opponents. The town hall is kept in the center with a hard wall surrounding it. The two surrounding sections contain the archer queen alter and the barbarian king alter. The resource towers are kept in security, inside the clan for extra protection. 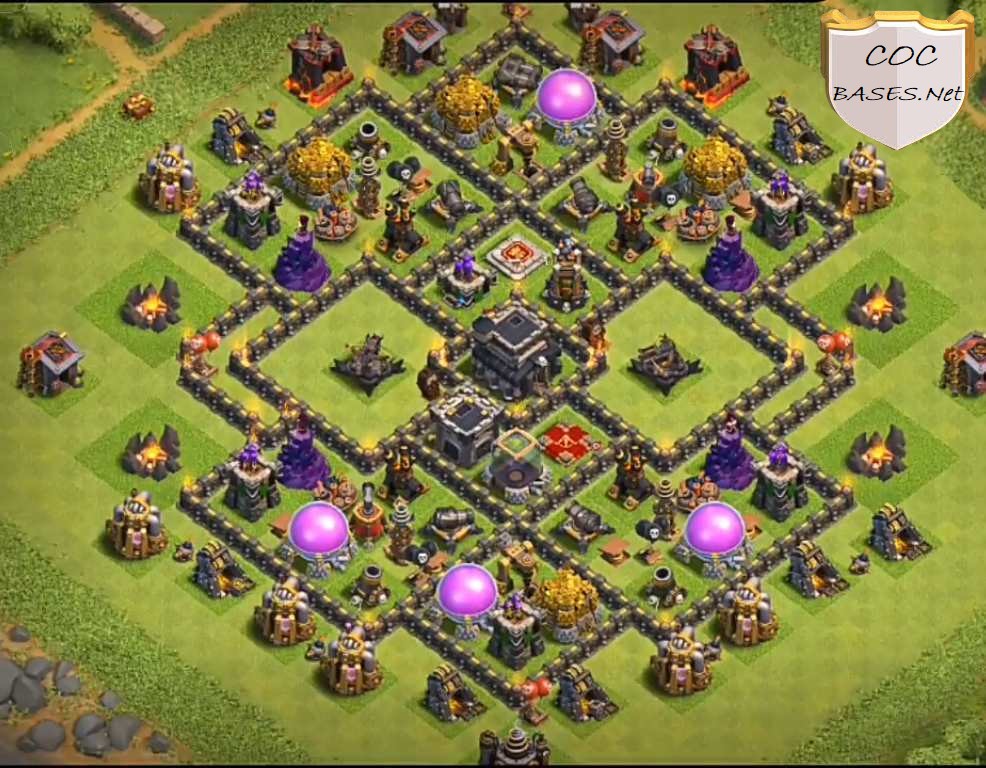 TH9 Hybrid Base No Xbow

This is the best th9 hybrid base with heavy resources and fully covered with buildings. At initial, mostly the players don’t have so many buildings, but with time this base is easily made. The town hall is centralized with an archer queen alter, covered with a hard wall. There are small compartments, each compartment is well-equipped with defense towers and resource buildings. The resource buildings are equally distributed in the clan as we have to save the troop from loot. There is an extra outer layer surrounding the whole clan containing mortar, cannon, air-defense, army camps, and more well advanced defense towers. 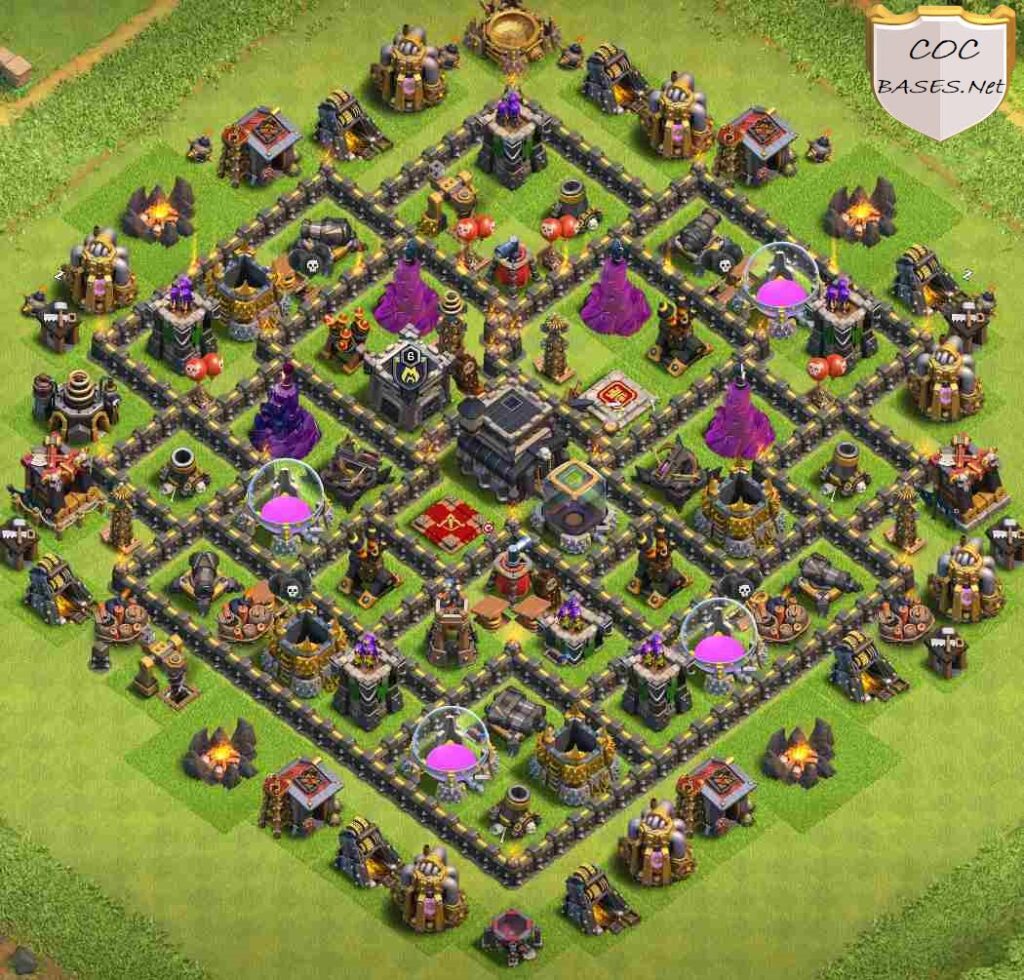 Here we have shown some advanced strategic designs for town hall 9 beginners. The town hall is centralized in this best th9 hybrid base. The two sides of the central section are covered with archer queen alter and barbarian king alter. The other two sides of the central compartment are covered with sections containing important resource buildings. Every defense tower has a limit, which they can protect. So the placement of buildings is very important while forming the best th9 hybrid base layout. The resource buildings and town hall are well secured in this town hall9 base design. 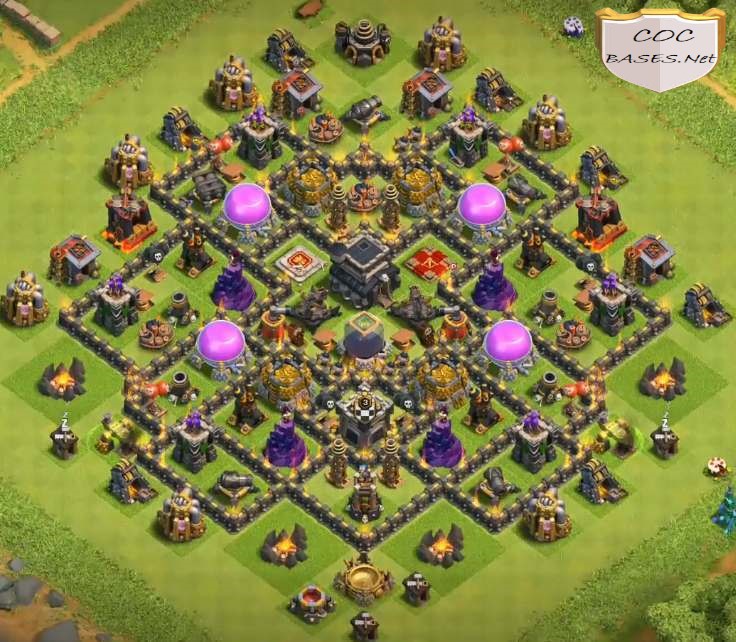 It is the simplest of all the best th9 hybrid bases mentioned in this hybrid bases guide. It consists of many small square compartments and an outer layer of a heavy defense army. The town hall is centralized with a clan tower and canon tower for the protection of the clan. This best hybrid base consists of th9 archer queen alter and barbarian king alter, which are most effective for your clan. The resource towers are distributed equally in all the sections, the important ones in the center while the non-important ones in the outer layer. 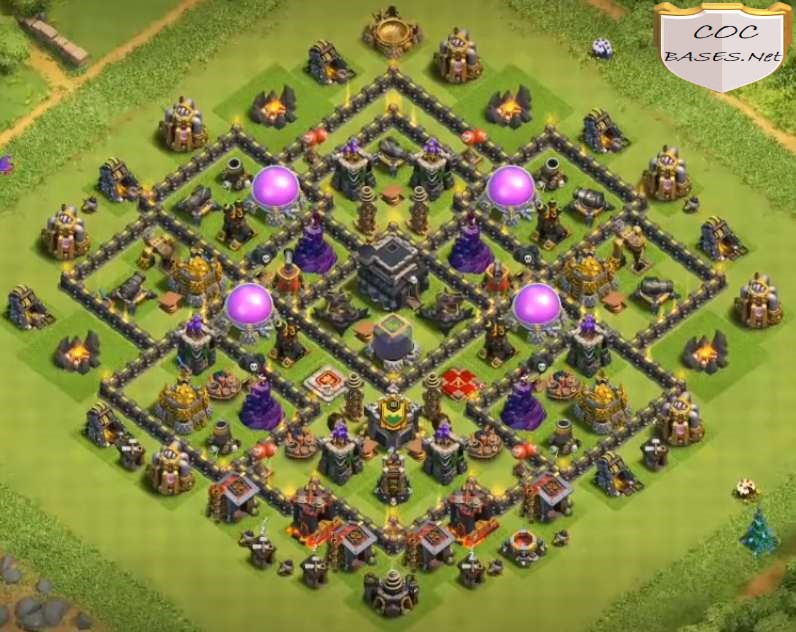 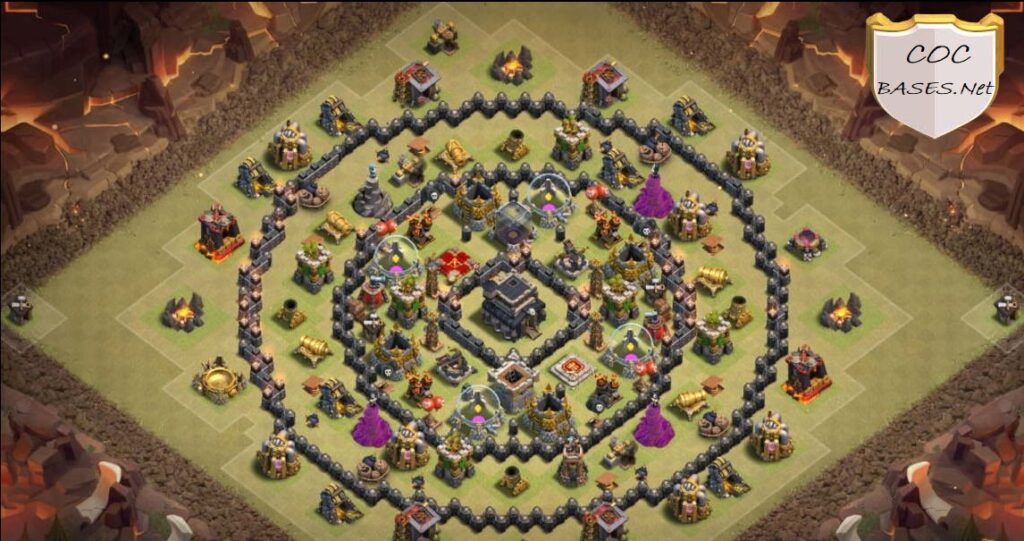 th9 farming base town hall outside