Townhall 5 is an amazing level of the game clash of clan, the players who are at the initial level they will find this level difficult and trilled. But soon when they will go further and play with the hero, they will find these levels simplest and easy ones. This town hall 5 is considered as the lowest level and to win this level you need the best th5 war base. If your base is not strong then any attacker with 3 stars can easily destroy your base. 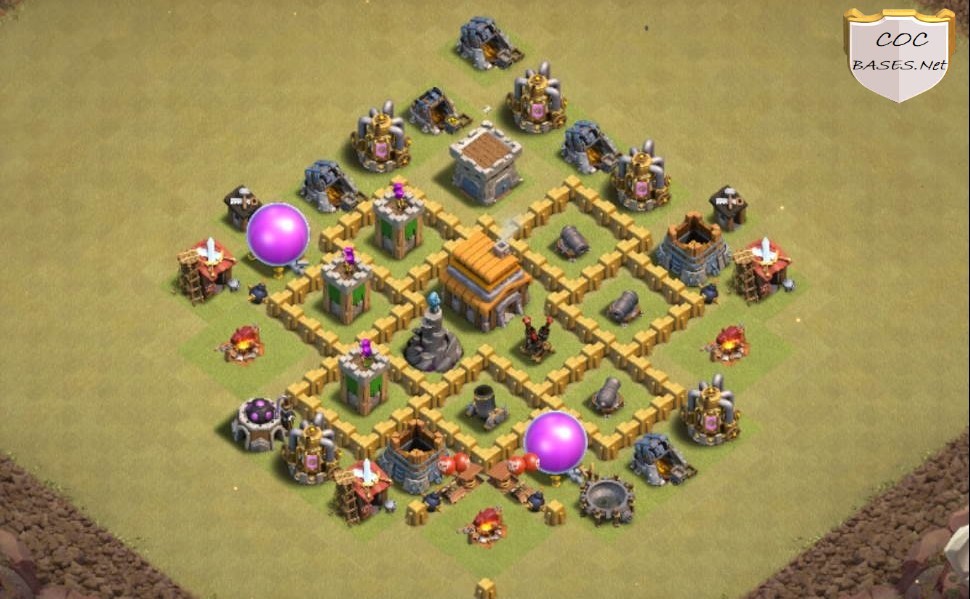 In the initial stages, the best strategy is no need of prioritizing the buildings, if you will place your defense tower to protect some specific building then it will sound like a waste! Use your town hall and storage towers just like other buildings and towers in the clan. Use the defense buildings to protect and secure the whole clan rather than protecting a specific building. In the initial stage of the game, players get to know the exact specifications of all the buildings and towers. With a little bit of practice and hard work, we can win any battle. 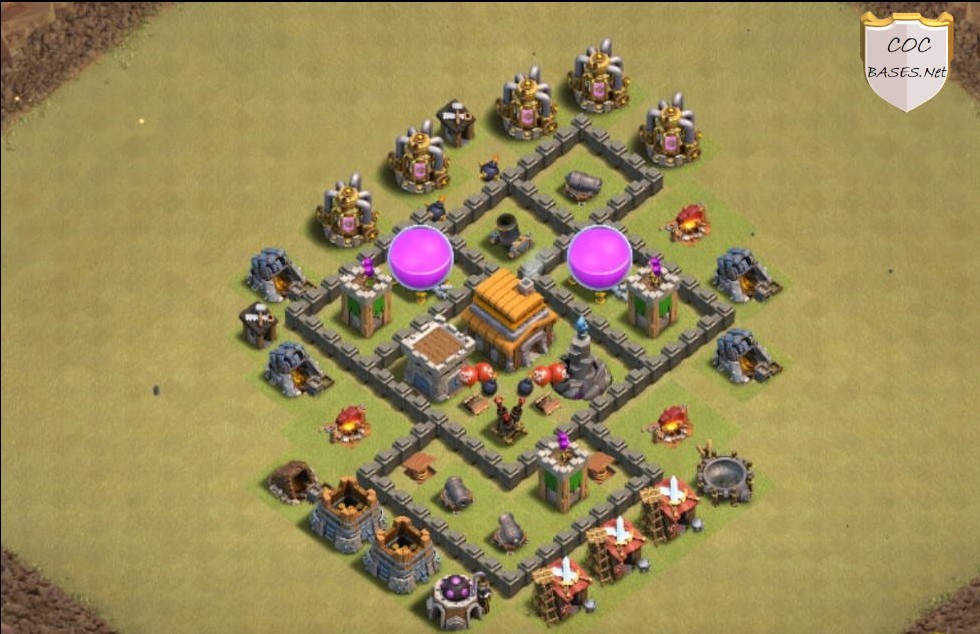 In war, it is effective to protect the town hall, as we are aware that if any damage happens to it our clan is destroyed completely. So to avoid destruction, most of the time the town hall is accompanied by defense buildings and is placed in the central region. We always focus on the protection of town halls and storage towers in the best th5 war bases. But it is more effective to protect your defense building as their life will help you stay and destroy the attackers. It is also a good strategy in war base layout, the mortar, cannon, and air defense are kept in the central portion. If we see the records, the air-defense is declared as the best building of defense against the healer’s attack. It is best in hitting and destroying the air attackers as well as the ground opponents. 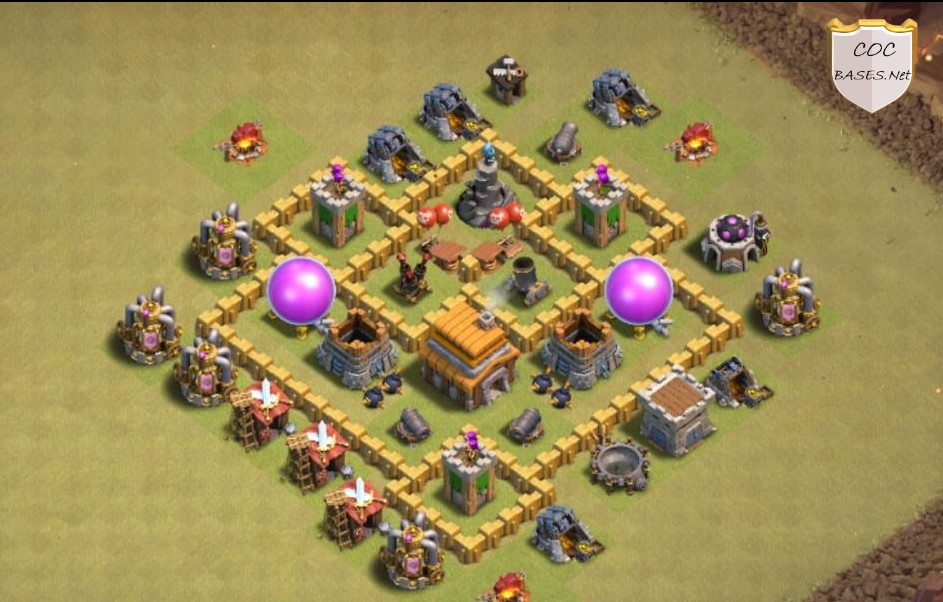 Here in this best th5 war base guide, we have mentioned some of the best war base layouts. These th5 coc base links are effective as well as quite eye-catching. In the initial stages, the bases are small and fewer buildings are unlocked, making it quite easy to place the towers. In this best th5 war base, the town hall accompanied by hidden tesla, air-defense, and mortar is placed in the central region of the clan. The amazing th5 base layout has small compartments in which buildings are placed. The whole clan is covered with the wall. Outside the wall, for the protection of the whole war base, the amazing defense buildings and army camps are assigned. 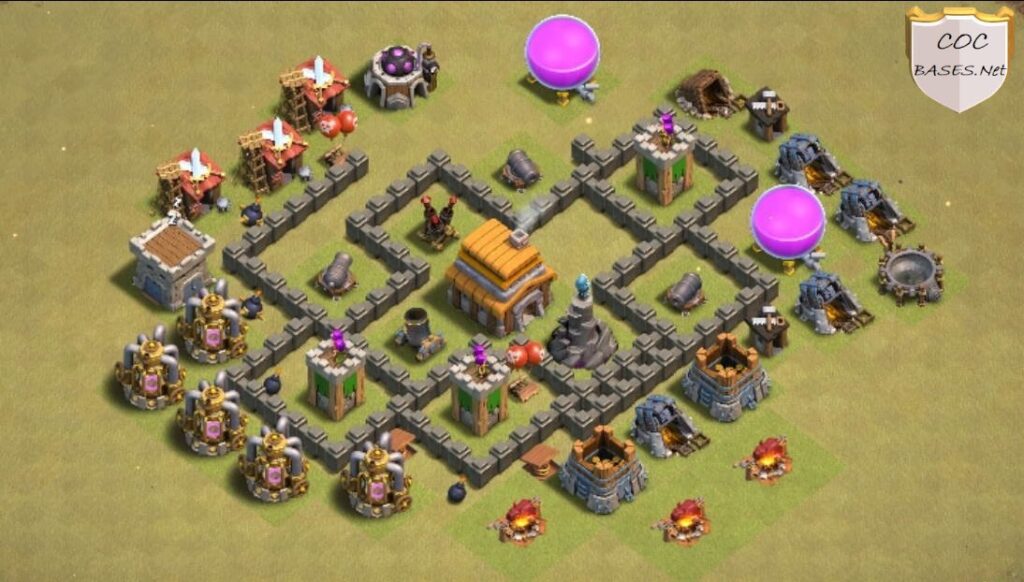 This war base layout looks like a gold clan because of the color of the walls. For the extra protection of the town hall, it is placed in the center with a maxed wall surrounding it. there are four same size sections in which clan caste, hidden tesla, cannon, mortar, air-defense are placed. They all are protecting and securing the town hall from outside. This best th5 war base is surrounded by an amazing maxed wall to avoid the entrance of enemies. The barrack, dark barrack, dark elixir collector, and laboratory are placed outside the clan. 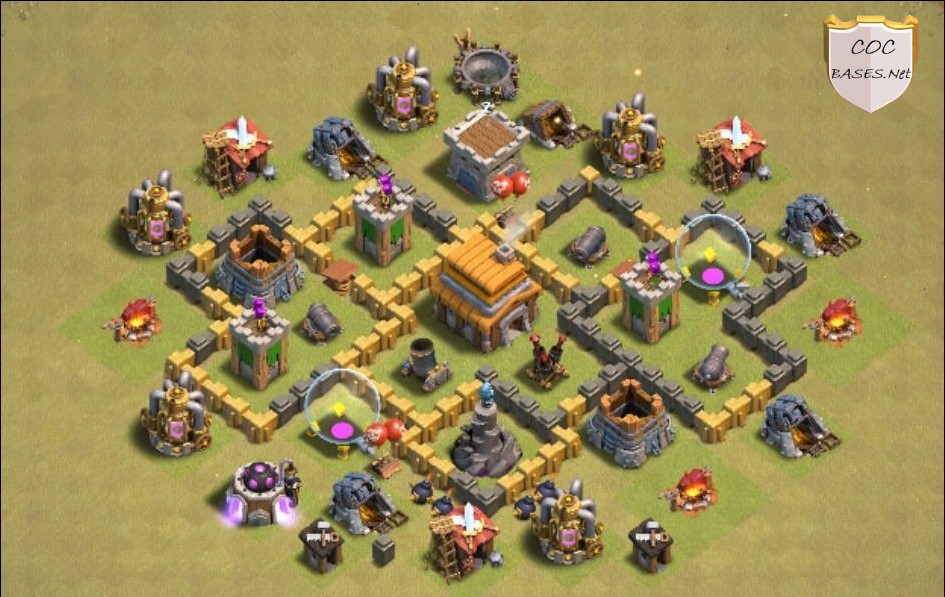 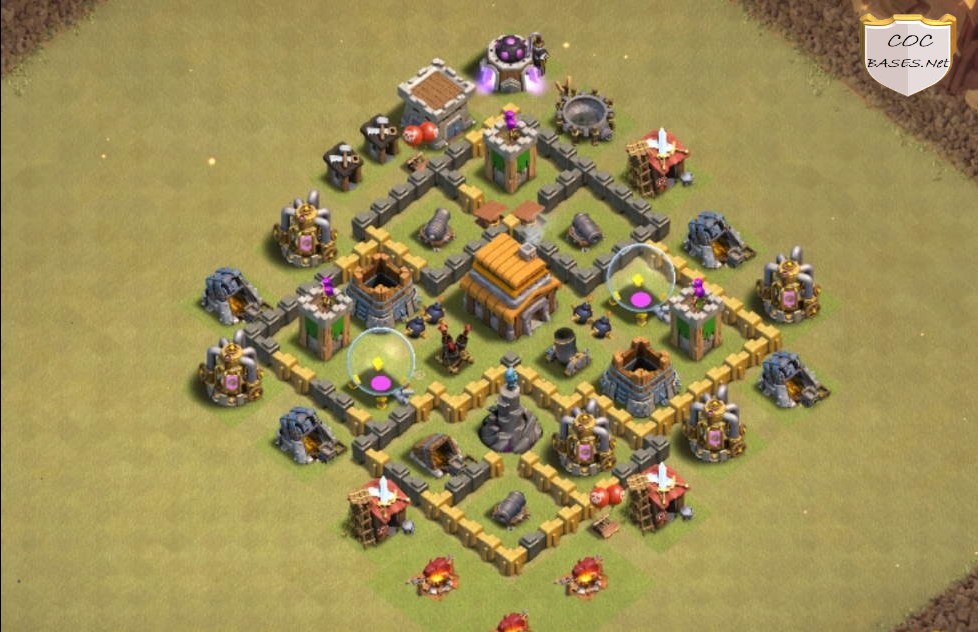 This one is also an amazing war base layout, quite similar to the first introduced best th5 war bases. Just the difference lies in the placement of the building and the design of the base. The town hall is placed in the center with hidden tesla, clan castle, air-defense, and mortar. Air-defense and hidden tesla are best to fight against the air and ground attackers and their combination is quite amazing. Just like the previous base design, this one also has four amazing sections in which resource towers and defense buildings are placed. The whole clan is surrounded by an amazing maxed wall, protecting the clan from enemies. The clan has an extra outer layer of buildings for more security. 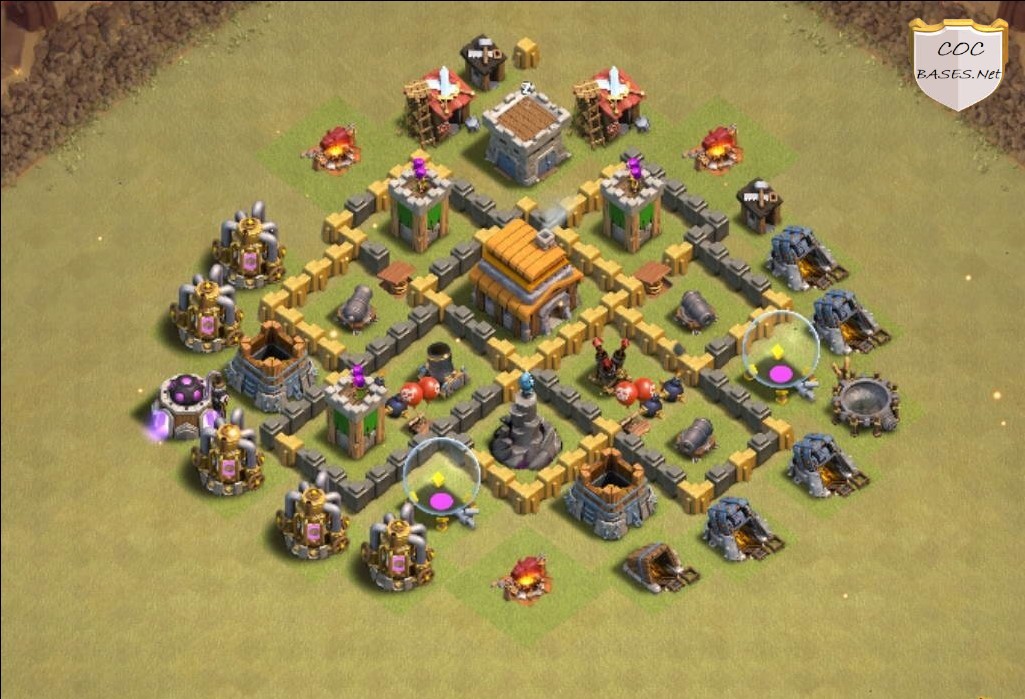 Whoa! One of my favorite war base layouts, which I think most of the players will love because of its strategic design. Here you can see the town hall is placed in the center with air-defense and mortar surrounding it. All these three buildings are extra secured with the maxed wall covering it from all four sides. There is a small section in which cannon towers, hidden tesla, and other buildings are placed. Like all other best th5 war bases, there is an extra layer of defense buildings surrounding the whole clan. This is an amazing strategy, to build an extra layer, to win the game for a long time. 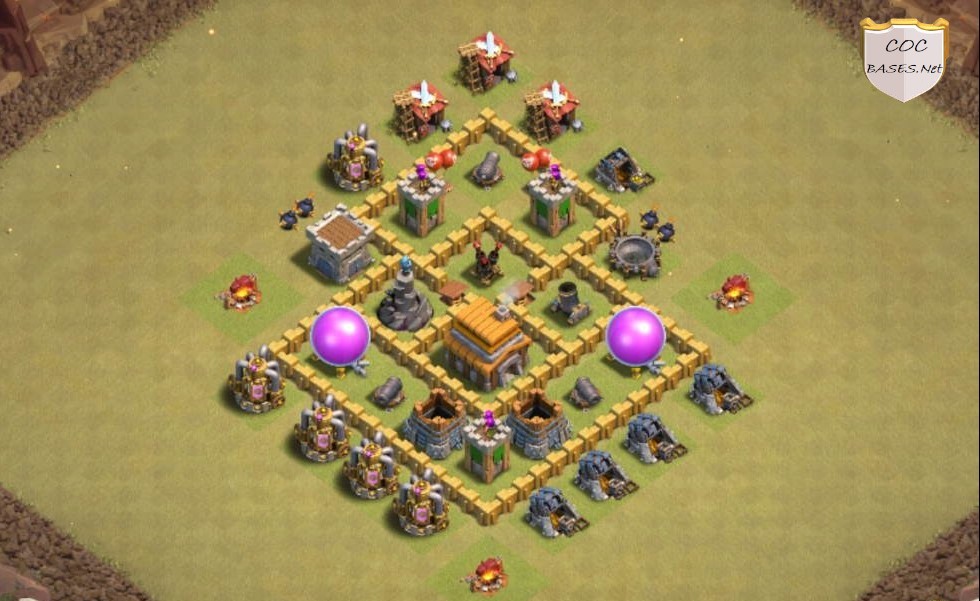 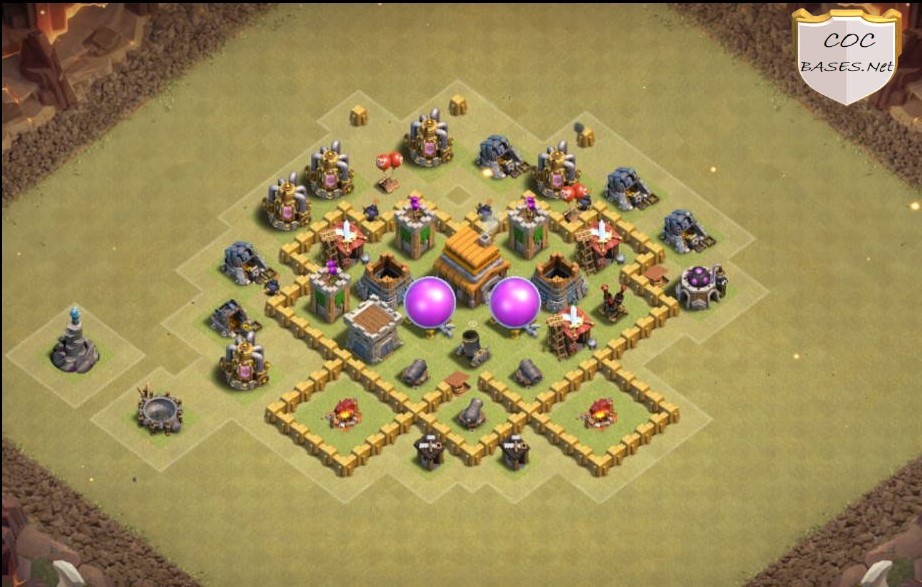 War Town Hall 5 Base Anti Everything

If you have fewer buildings or mostly the same buildings unlocked, then you can see this war base layout design to get guidance. The town hall is centralized with air-defense and mortar, done in previous mentioned base layouts. This best th5 war base has three cannon towers, hidden tesla, and clan castles placed in the inner section of the base. For extra protection, there is an outer layer of the building protecting the whole clan. The layer consists of the barrack, dark barrack, and dark elixir collector. 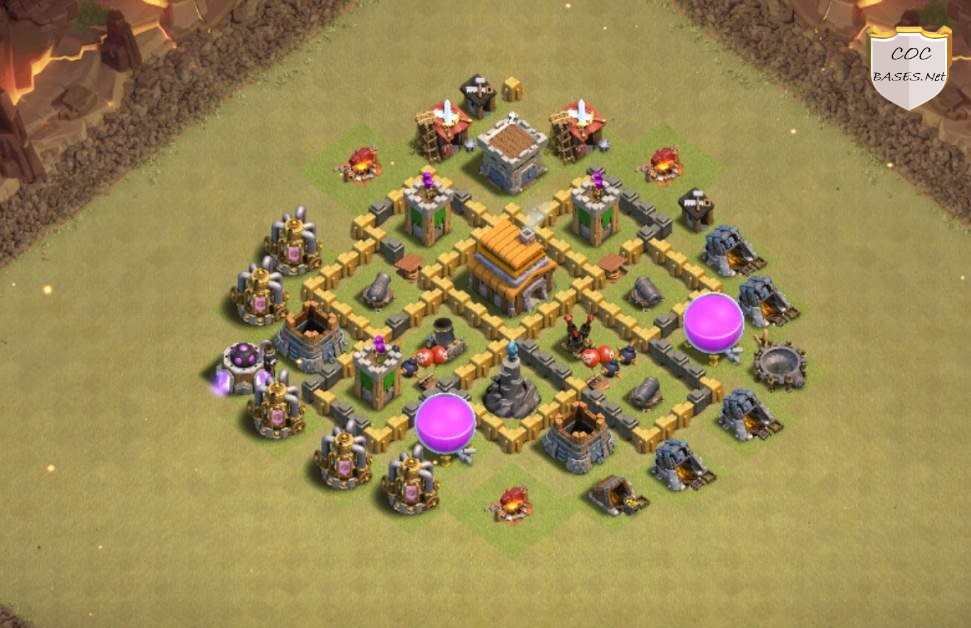 th5 farming base anti everything