Most of the people will say it town hall 7 but according to me, it’s the real start of the new trilled game. This town hall 7 hero is the level where real challenges start. Townhall 7 and town hall 8 are said to be the preparing level for the real town hall 9 hero grind. I would say that the real challenge which a player face is th7 and th8 as if you will learn better you will do better. If you can learn well in best th7 hybrid base and th8 clash of the clan then eventually you are prepared well for the ultimate town hall 9 hero grind. 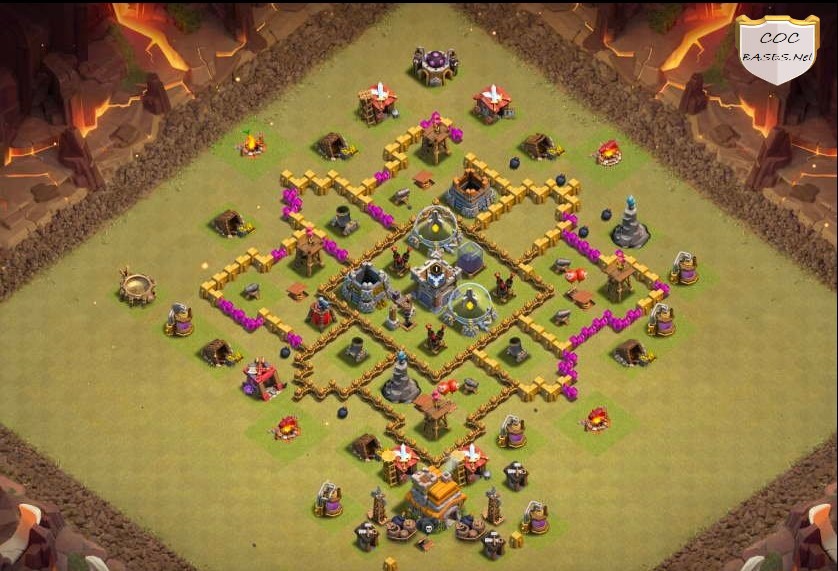 For making the best th7 hybrid base, it is very important to have a strategic upgrading priority list. If you will use a good tactic to upgrade your buildings and towers, it would become easy for you to form the best th7 base layout. The placement of buildings in the clan also plays an important role. As each tower has a limit in which it can protect the clan and also have a specific feature.

We have to keep the buildings inside the clan keeping in mind their specifications. In the th7 building order, the priority is given to army camp and spell factory instead of a laboratory. In most of the levels of clash of clans layouts, the priority in upgrading the list is given to the laboratory. 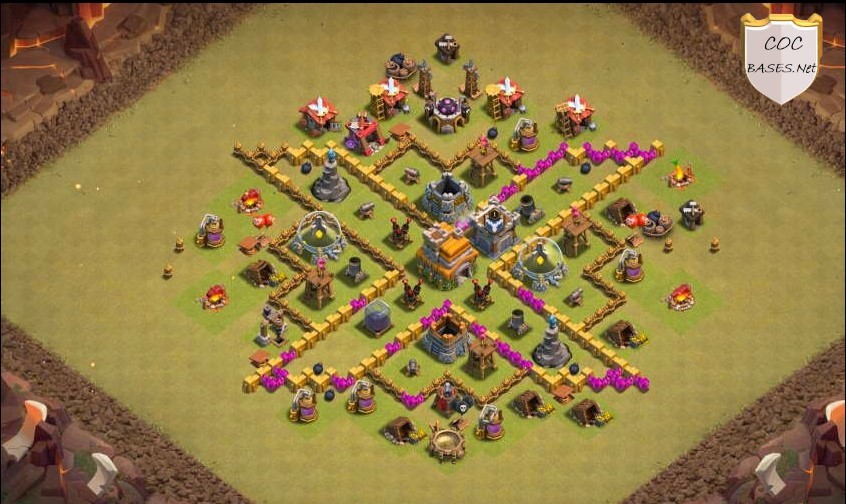 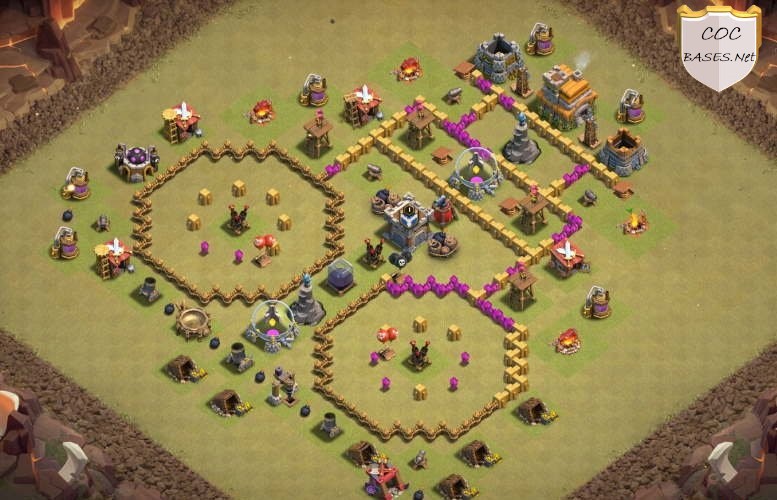 TH7 Hybrid Base without Barbarian King

Your goal for a hybrid base must not be the protection of resources or town hall but to avoid your opponents to gain stars. When the base link copy was not available, it wasn’t easy for troupes to make the perfect Th7 hybrid base design. But now it is much easier to make the amazing base layout with fewer buildings and upgrades. As you all will know that the hybrid base is a mixture of both farming and war designed base. In a hybrid base, it is very important to save both resources as well as the town hall. 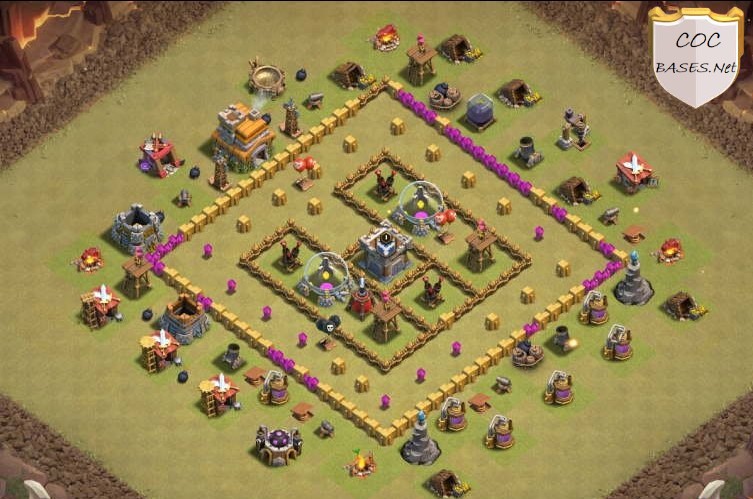 Here we have mentioned some of the qualities of the best th7 hybrid bases, and also some strategies for placement of buildings and towers. In this best base layout, the town hall is kept in the center with a maxed wall surrounding it. The clan is distinguished between small sections, compartments, and layers to keep the troop inside it. The layer outside the central compartment consists of barbarian king alter and dark elixir storage. There are many defense towers and army buildings outside the town hall wall to keep it safe and sound. It is a small base with less building but is quite effective to keep the opponents away. 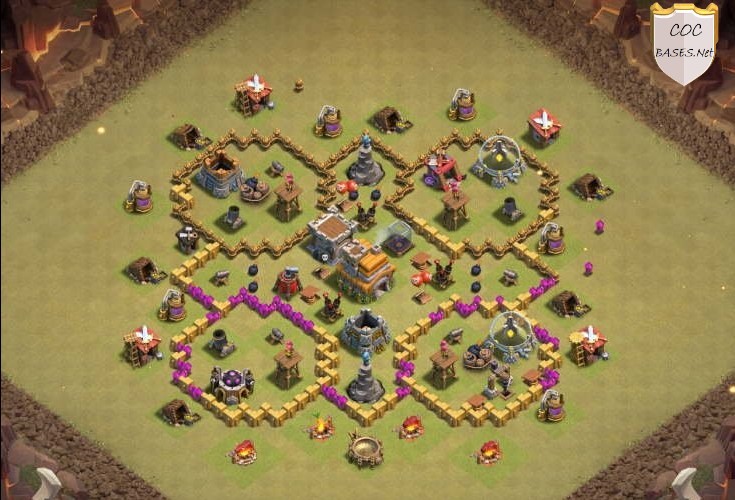 This is also one of the most effective th7 base layouts, that consist of a town hall placed in the center. With town hall, a few more buildings are clan castle, dark elixir storage, air-defense, and some small defense buildings. There are very small compartments and each compartment consists of different resource buildings and defense towers. There is an outer layer that is surrounding the whole clan which consists of a dark barrack, spell factory, elixir collector, and barrack. This is one of the effective th7 base design that most of the players are loving. 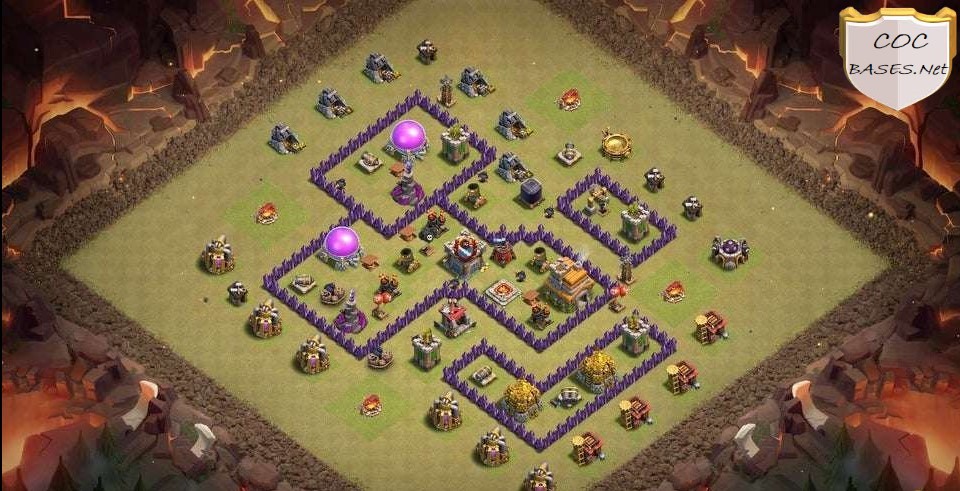 Town Hall 7 Hybrid Base No King

When you have more buildings and are worried about forming the best th7 hybrid base. Then no worries as this best base layout are for those who want to build a hybrid base with more maxed buildings. For the protection of the town hall, it is kept in the center portion surrounded by a hard wall. As we are aware that in a hybrid base we have to protect the town hall as well as resource towers. so in this town hall 7 base layout, we have kept resource towers inside the clan. The barbarian king alter is also unlocked and placed in one of the sections. This best town hall 7 hybrid base has an outer covering of army towers and a defense building to protect the clan from opponents. 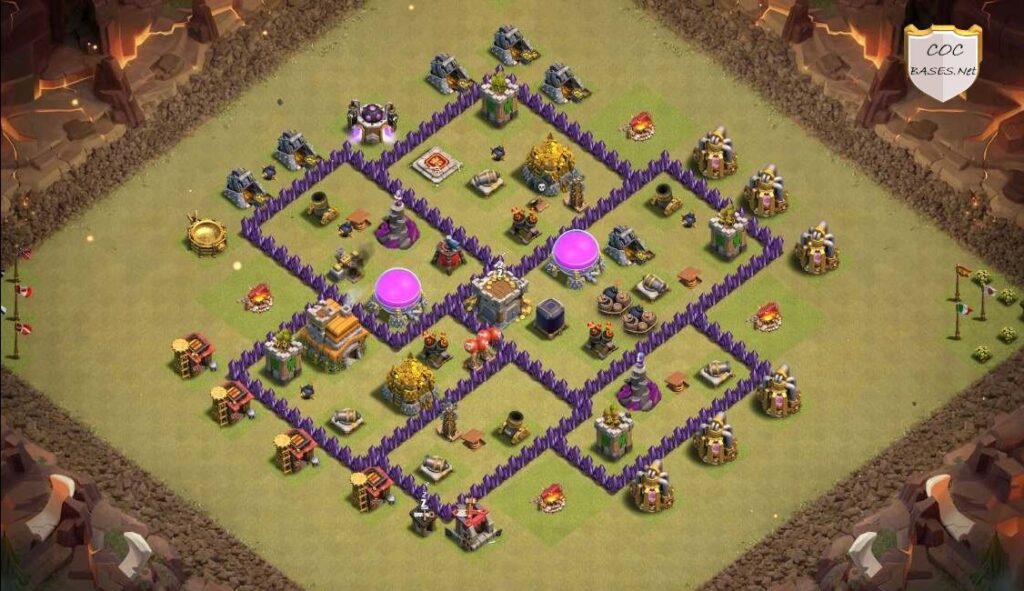 Here we have mentioned the two best th7 hybrid base 2022 that are built with some amazing strategy. The first one is different from a square-shaped hybrid base, it is a diamond-shaped base layout. This design makes it quite different from other bases and it is more eye-catching. The town hall is fully protected by placing it in the center section with barbarian king alter and elixir storage. The hidden tesla, gold storage, cannon, archery, mortar, air-defense, and many other amazing buildings are distributed equally all over the best th7 hybrid base. The laboratory, spell factory, elixir collector, barrack, and dark barrack are placed outside the clan to save it from the opponents. 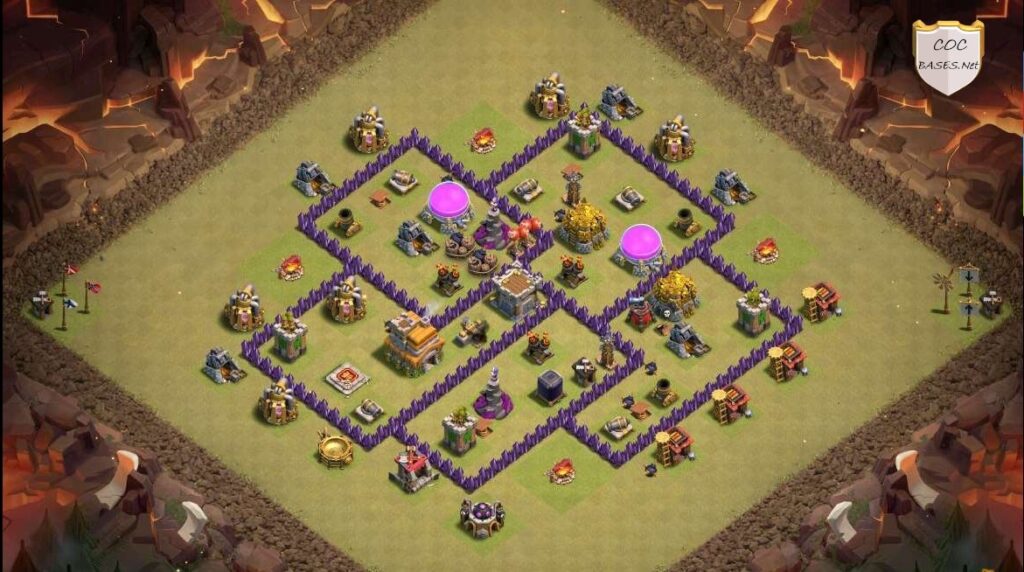 The second-best town hall 7 hybrid base is also amazing as it contains fewer buildings arrange in a very effective manner. If you don’t want your town hall in the center, then this best th7 hybrid base is a better choice for you. In the center, the base consists of a clan castle, dark elixir storage, and air-defense. The town hall is placed in a side compartment with a barbarian king alter. In this base, the placement of the building is done in a very effective manner. 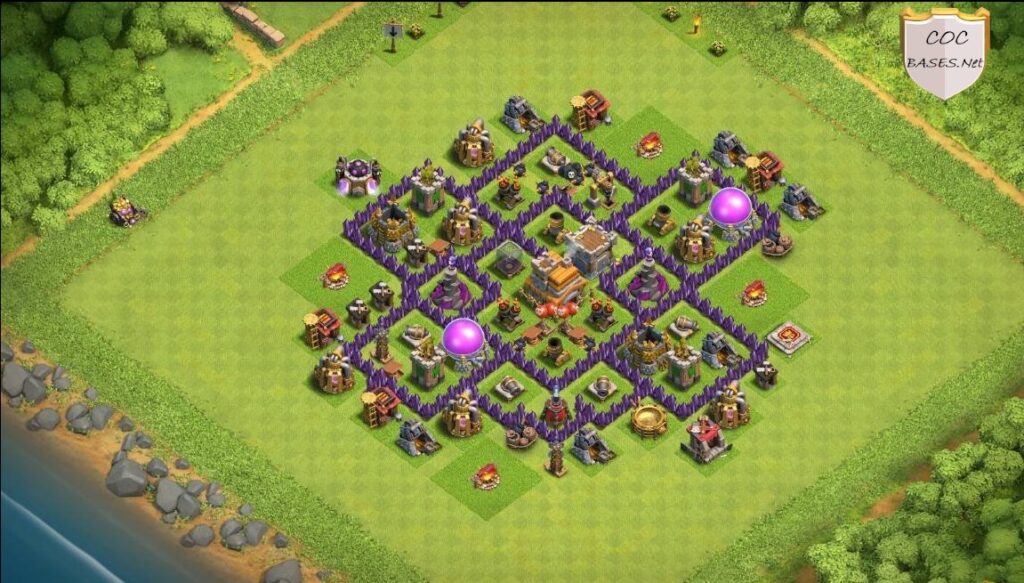 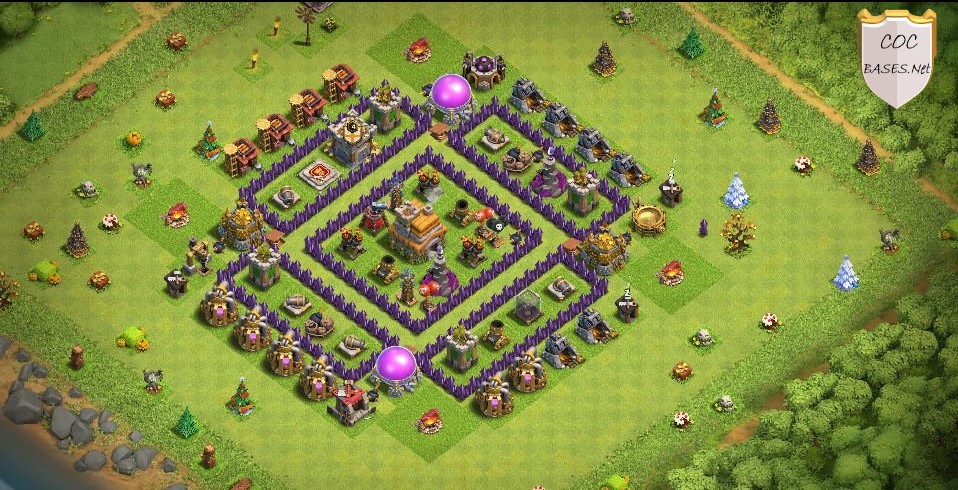 th8 hybrid war base anti everything