The Best TH7 Trophy Base clash of clan is out in the market with new features and challenges. Players are loving the new level and it will be not wrong to say that town hall 7 is the real beginning of the game. Firstly, in this best town hall 7 bases, the hero is introduced which is the barbarian king alter. This hero is said to be the weakest of the three heroes but in Th7 it has the strongest role. Secondly, in this level, the dark elixir is unlocked, which will get maxed in the next levels.

TH7 Trophy Base Anti Everything

Thirdly, it is quite simple to build a dark barrack in this best th7 trophy base. In this level of clash of clans base layout copy link, you need to apply a different strategy to farm or gain the trophies efficiently. The th7 and th8 are said to be the trail level to practice for the ultimate town hall 9 hero grind. If you can unlock and max the buildings in th7 and th8 then the game will become much easy in level th9. 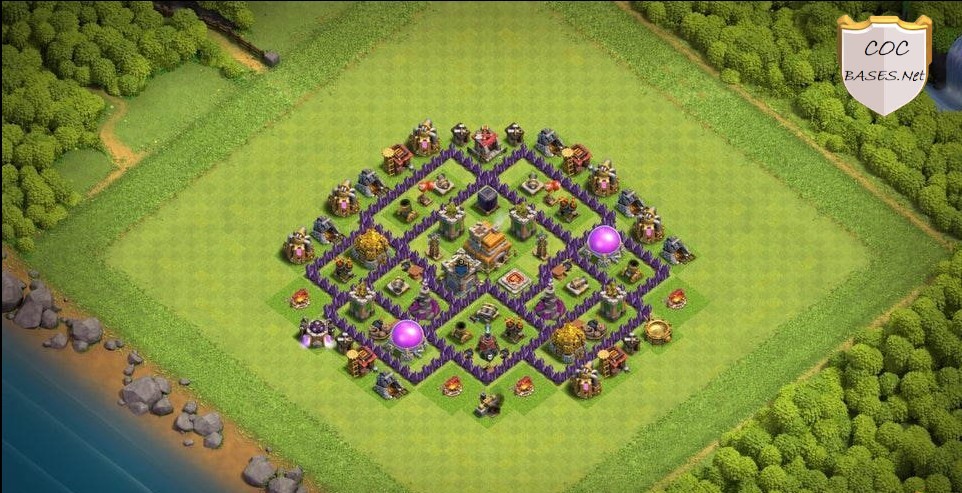 Every level has its strategic tips to make the best upgrade priority lists. In most of the levels, players prefer to upgrade the laboratory but in th7 it is best to upgrade army camps and barracks. As in town hall 7, the players have fewer buildings and towers available to build the effective th7 base layout. So, it is important to focus on securing your base layout rather than upgrading the particular building. 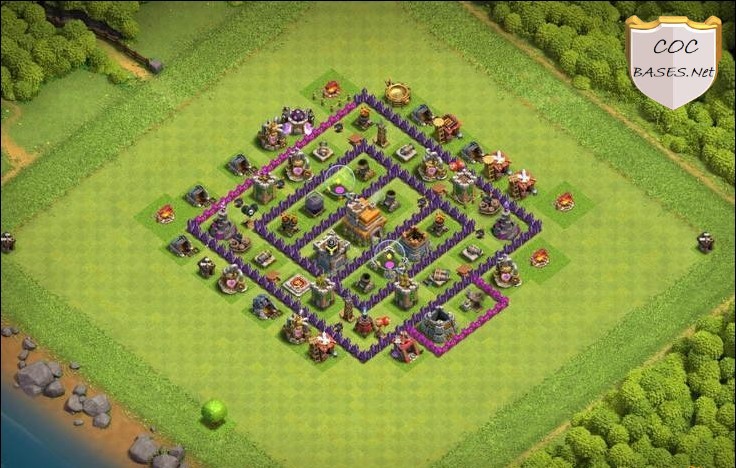 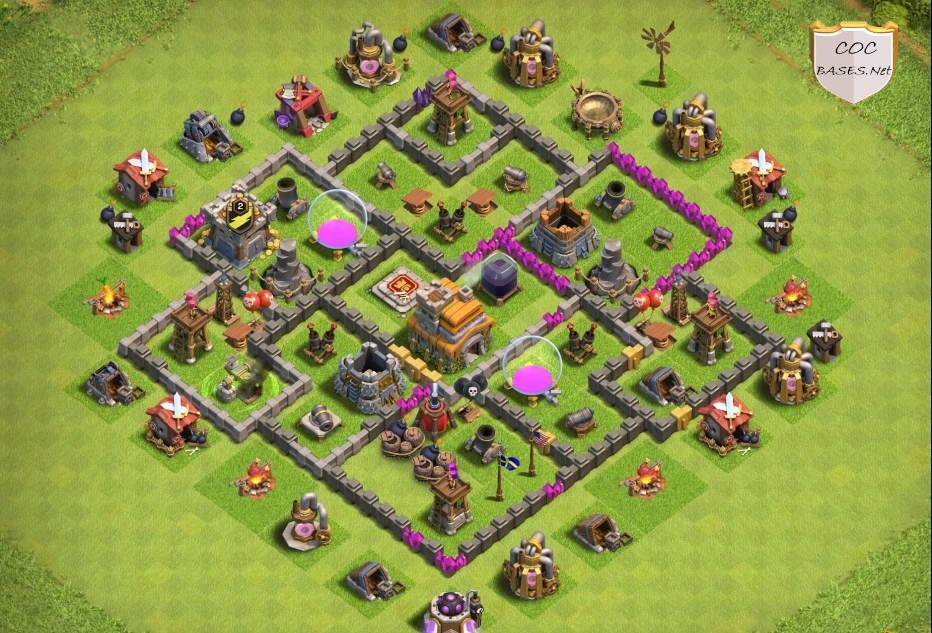 Like if you have only one mortar to protect the clan then if you will try to upgrade it, it will take an hour. At the start, it is very important to think about some of the serious layouts. In this best th7 trophy bases guide, you will get to know a more detailed picture of how to build the best th7 trophy base in the town. 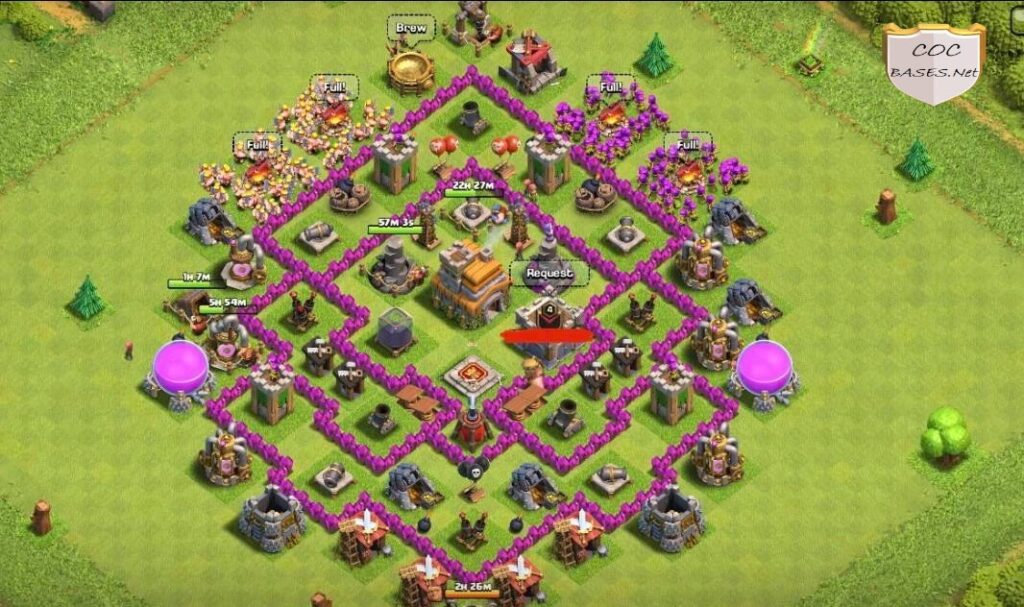 The placement of buildings, you have upgraded, depends on what players are aiming for. They will prefer to protect their storage like in th7 farming base layout or their town halls like in the trophy base layout and war base th7 layout. Here in this best th7 trophy bases guide, we will discuss the trophy base if you are preferring to choose one.

Most players in town hall 7 don’t like to push trophies as they are waiting for a particular league with a better attack and star bonus. But I would say that it will be a good strategy to play with trophy base layout in town hall 7. The strategy for the trophy base link is quite similar to the war base link, first, try to upgrade the army camp as already mentioned above. Maxed-out army camp will help you recruit troops equal to housing space for 200. For best attacking you can use the Mass Dragon Attack base design.

Unbeatable Trophy Base Link for Th7

Here we will discuss some of the most effective base links for town hall 7. In this first best th7 trophy base, you can see that the clan is distributed into small sections to make it more secure from opponents. The central square section consists of a town hall, barbarian king alters clan castle, and some best defense towers.

Inside the clan there are many amazing buildings and towers like hidden tesla, gold storage, dark elixir storage, archer, cannon, and mortar placed to protect the whole clan. Outside the clan, there is a layer of gold mines, elixir collectors, army camps, spell factories, and laboratories. The best trophy base is the one in which the town hall is fully secured. 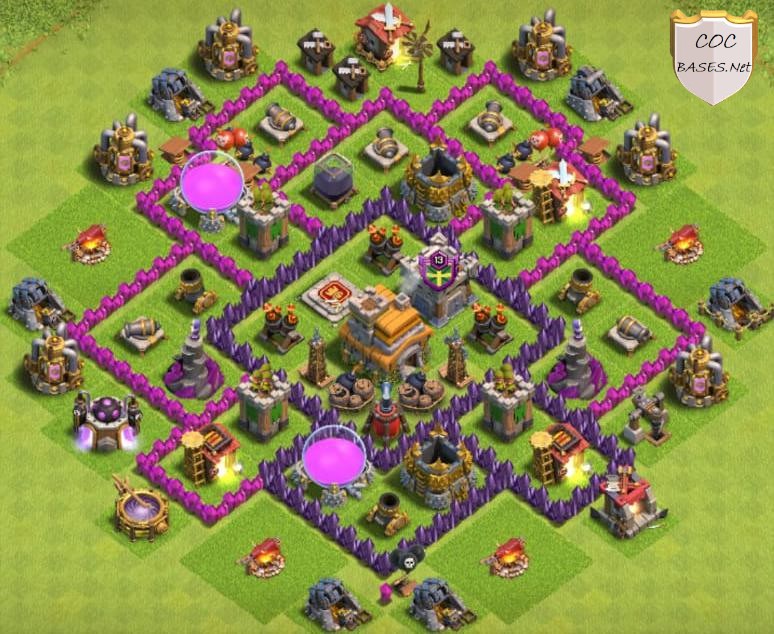 If you want a more eye-catching base layout, then this best th7 trophy base is especially for you. The placement of buildings and towers is quite similar to the first design but the look is much prettier. The town hall is centralized with a clan castle and dark elixir storage. In the center for the protection of the town hall, air-defense and mortar are placed.

The clan is separated into small compartments, and each compartment consists of resource buildings and defense towers. In this best trophy base link, the barbarian king altar is placed inside a section, which for me is a good tip. There is an outer layer that is providing extra protection to the clan. 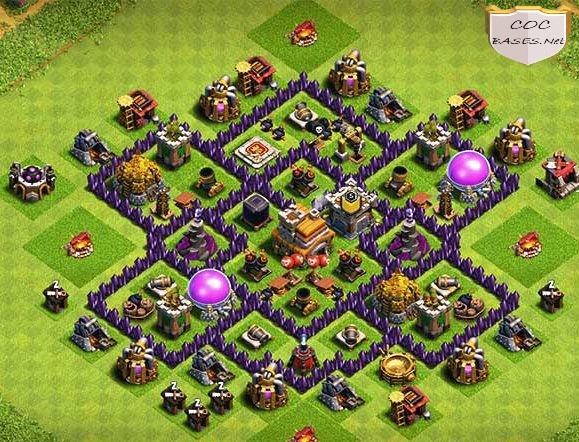 Some players like to build a simple-looking base layout but also want it to be effective at the time of the attack. This is a simple best th7 trophy base in which the town hall is placed in the center with a maxed wall surrounding it. There is a layer outside the center section consisting of barbarian king alter, hidden tesla, a cannon, air-defense, and mortar. These are buildings that are placed for the defense of the town hall as we know that in the best trophy base design town hall is much more important. Outside this layer, there are small sections containing defense buildings and resource towers. The spell factory and laboratory are placed outside the clan. 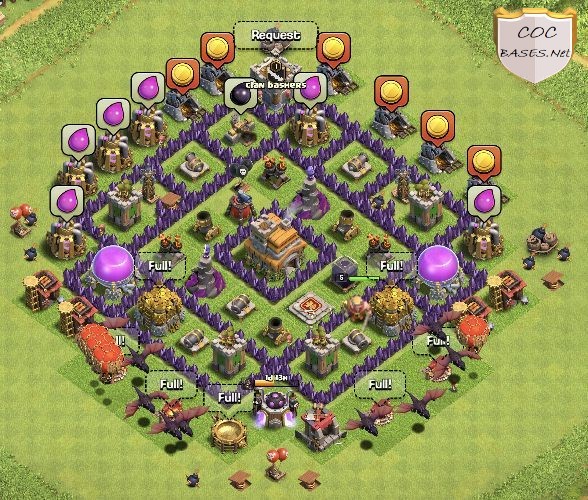 Here we have shown the two simplest bases that are very effective for collecting trophies. This first base is not divided into many sections but only has two big compartments with a maxed wall surrounding it. One compartment consists of a town hall, barbarian king alters hidden tesla and mortar. The second compartment consists of resource towers that are important to secure. The defense buildings and army towers are placed outside this best th7 trophy base for the protection of the whole clan. The laboratory is also placed outside the clan. 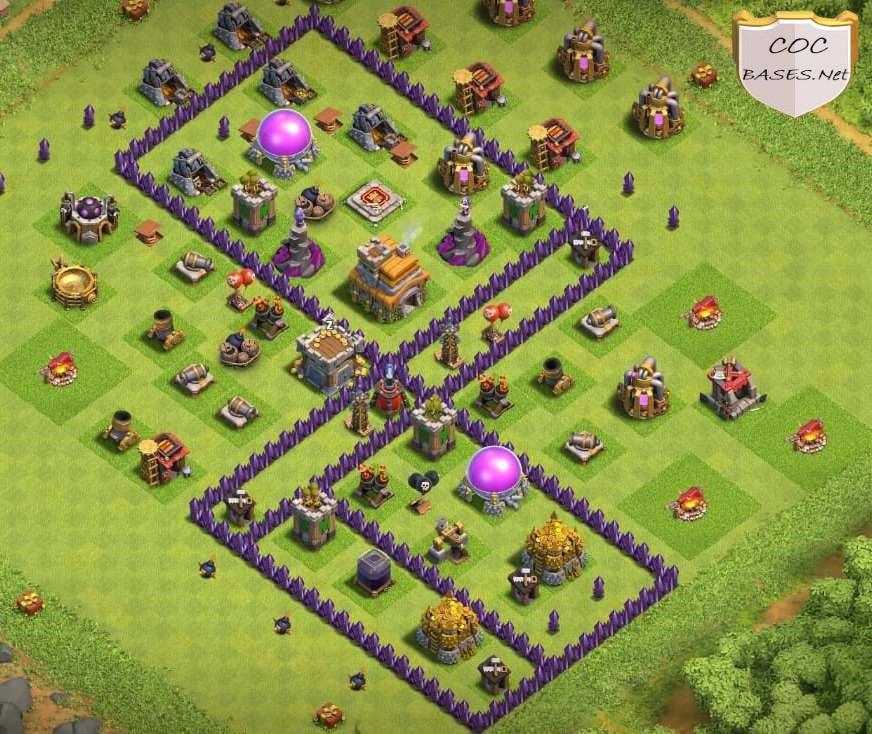 This is one of my favorite trophy base layouts, as it is best for war as well as for gaining trophies. The town hall is also fully protected in this best th7 trophy base, by placing it in the central region with a maxed wall surrounding it. This best trophy base layout consists of a barbarian king alter, hidden tesla, clan castle, dark elixir storage, air defense, a cannon, mortar, an archer, and gold storage. Outside the clan, the spell factory, laboratory, army camps, dark barracks, and elixir collectors are placed for protecting the whole th7 clan.

th7 farming base th outside