The TH12 level of the game clash of clans base was the finest, containing the addition of Giga Tesla. In Town-Hall 12 the Giga Tesla is unlocked that can defend itself when enemies attack the clan. This is an advanced feature that comes after upgrading the level to TH-12. When your TH12 base is destroyed up to 51% of the Giga Tesla appears to save the clan from enemies, it can be through a spell or by the troop. In Town-Hall 12 the maximum number of the building available, to build a th12 base links, is 96. It takes 14 days to upgrade from TH-11 to TH-12. The buildings are divided into different categories for TH-12 such as defense, resource, army, and other buildings.

Here, in this best th12 base links, we will discuss the best layouts that cannot be destroyed easily by the opponents. These layouts are different from the TH11 base layout, as the buildings are upgraded in TH-12.

If you want the best base layout, then your priority must be saving your resources in the farming base, trophies in the trophy base, and your town-hall during the war base. It depends on your way of playing and your priorities, which th12 base layout will impress you. For saving your town-hall, resources, and trophies, you must centralize them with a heavy defense building surrounding them. It is a very effective tip and strategy to save your troop in times of war. 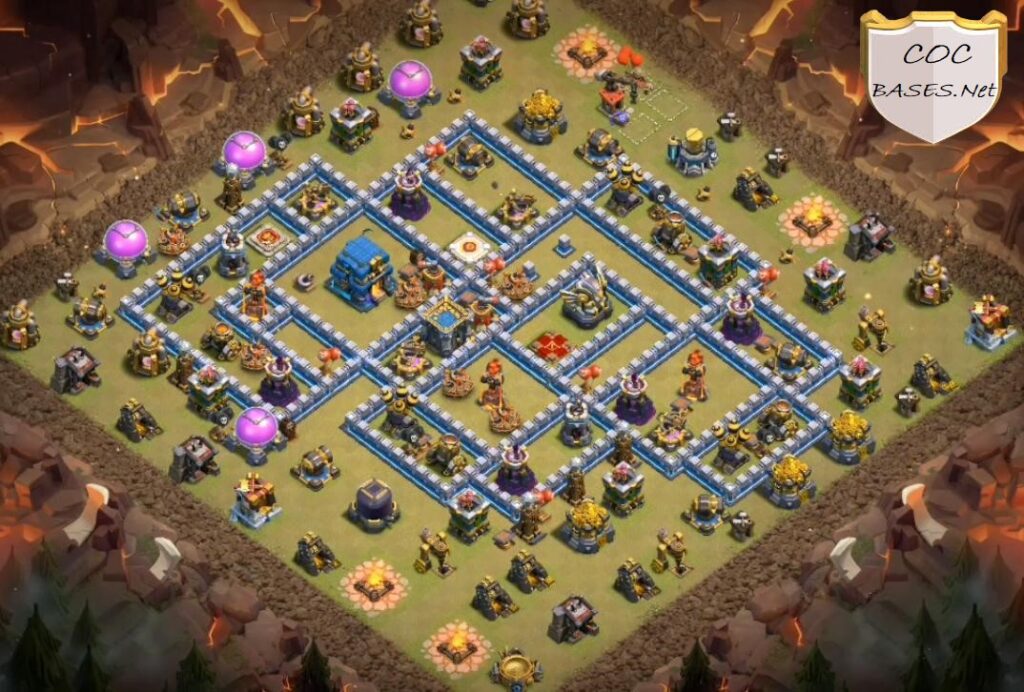 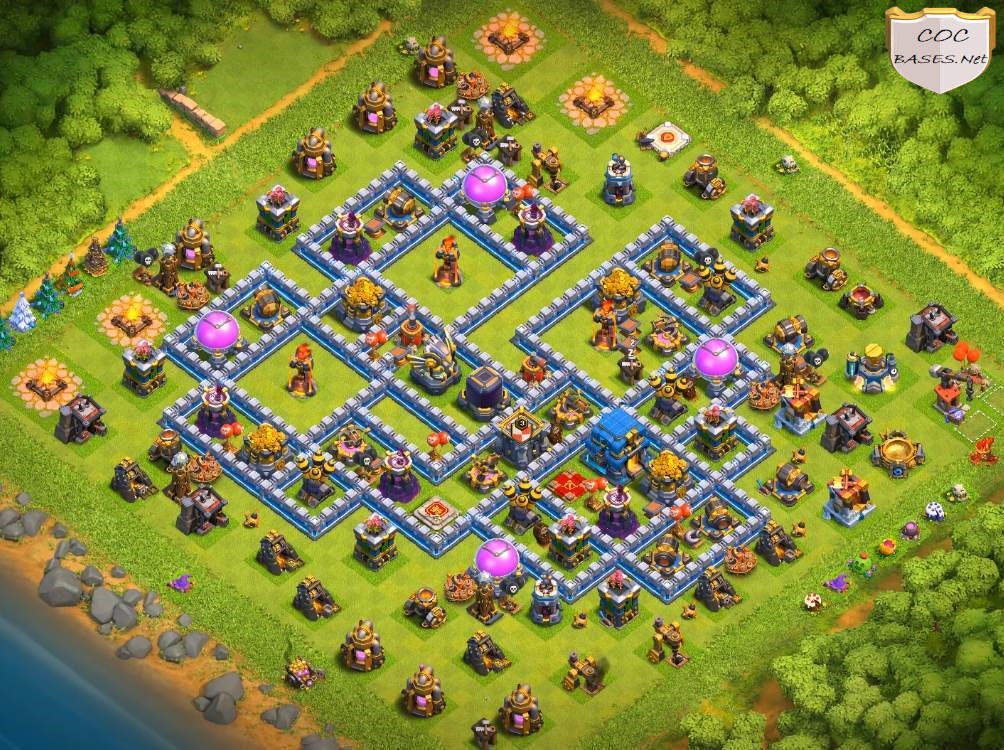 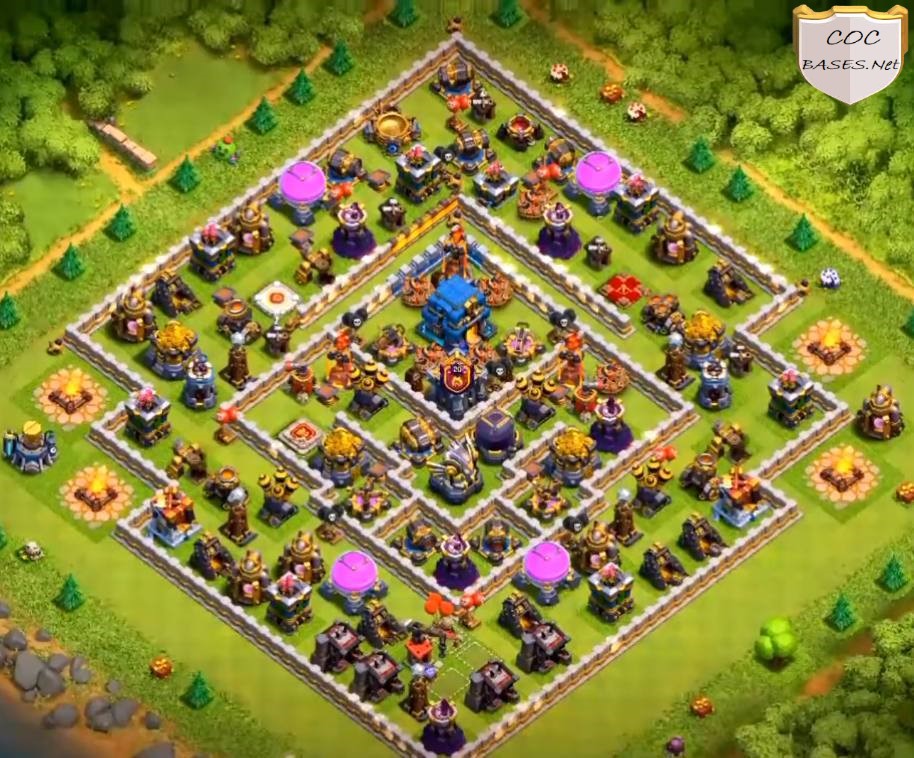 These th12 base links are best for both farm and war strategies, first place the Town Hall in the right place so it is saved from destruction. Surround the Town Hall with a wall and outside the wall place some defense army. Place eagle artillery in one compartment and surround it with a heavy wall. In the outer layer place some army camps, air-defense towers, mortar, cannon, archer towers, and collectors. 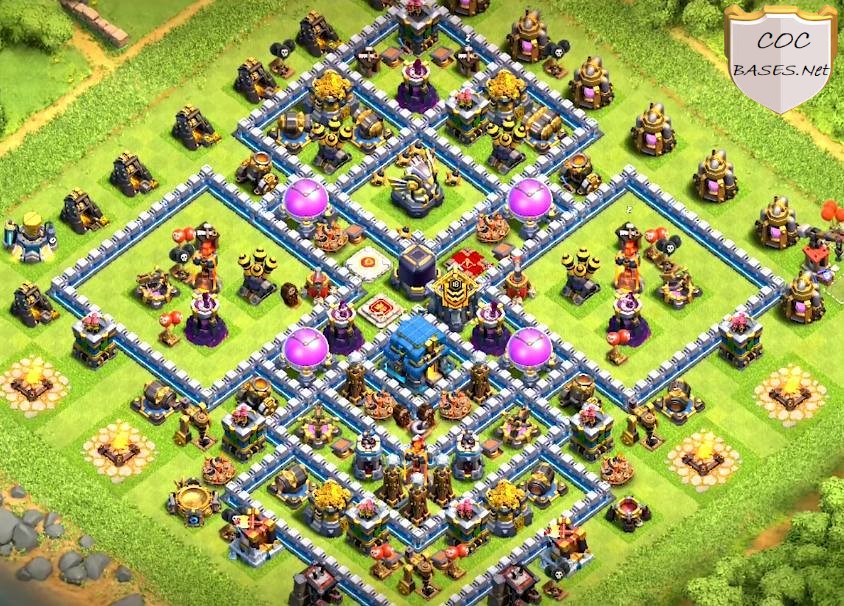 This base design for th12 is also very hard to break by the enemies. The wall used is not so defensive, it is a wall from TH-11. The Town Hall and clan castle are placed in one compartment surrounded by the wall. The wall is packed with a heavy defense army. The eagle artillery is also placed inside the base zone for the protection of Town Hall. The outer layer of these th12 base links has defense buildings with some resource buildings. 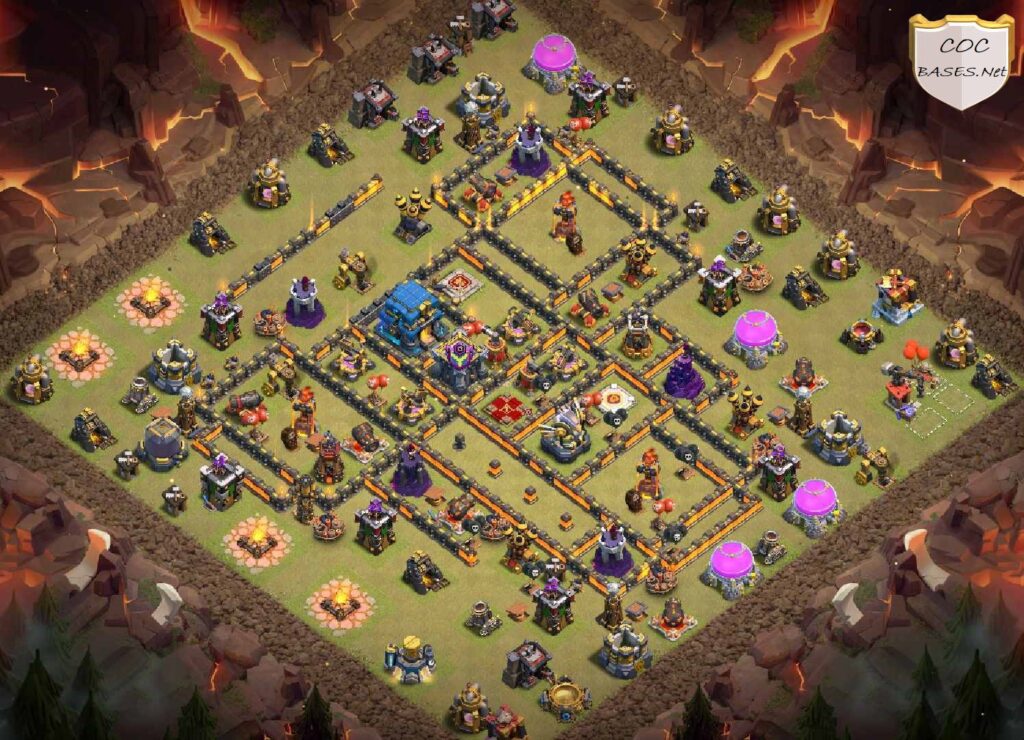 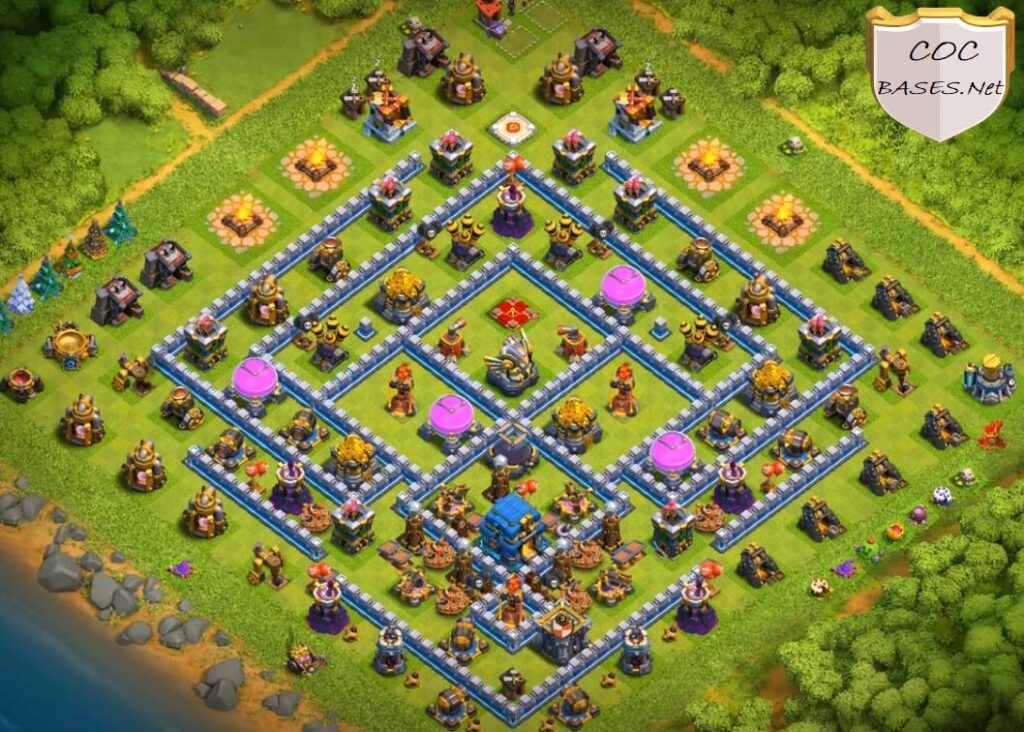 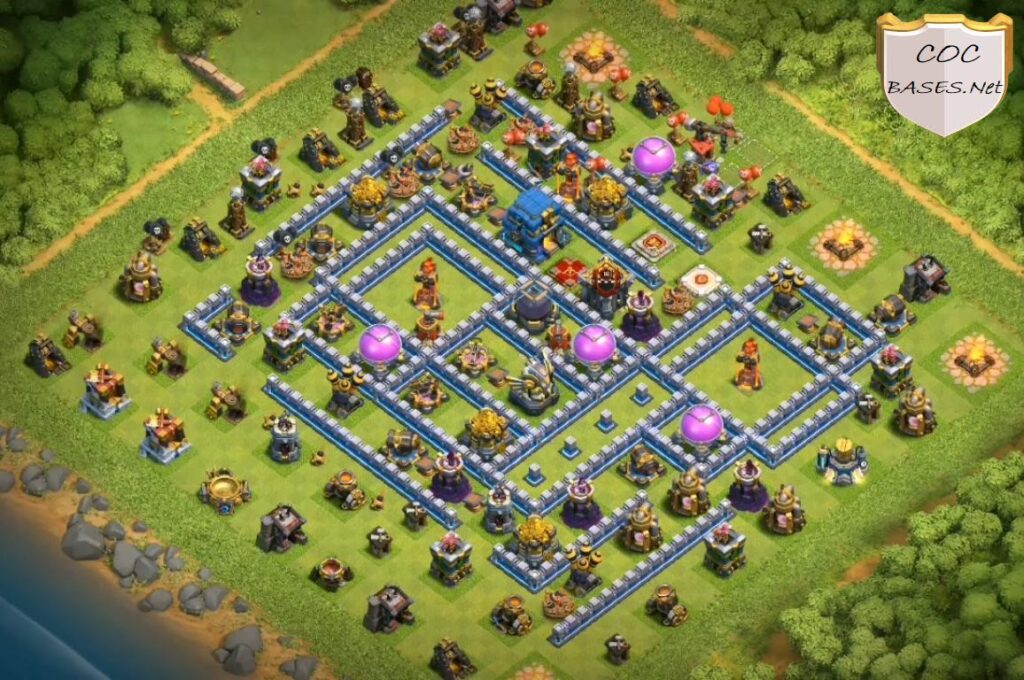 If you have fewer walls and buildings, then this base is best to be designed for the protection of your clan. In one compartment of these th12 base links, Town Hall is placed under better protective walls. The base is divided into two halves; both halves are covered by a heavy defense army. 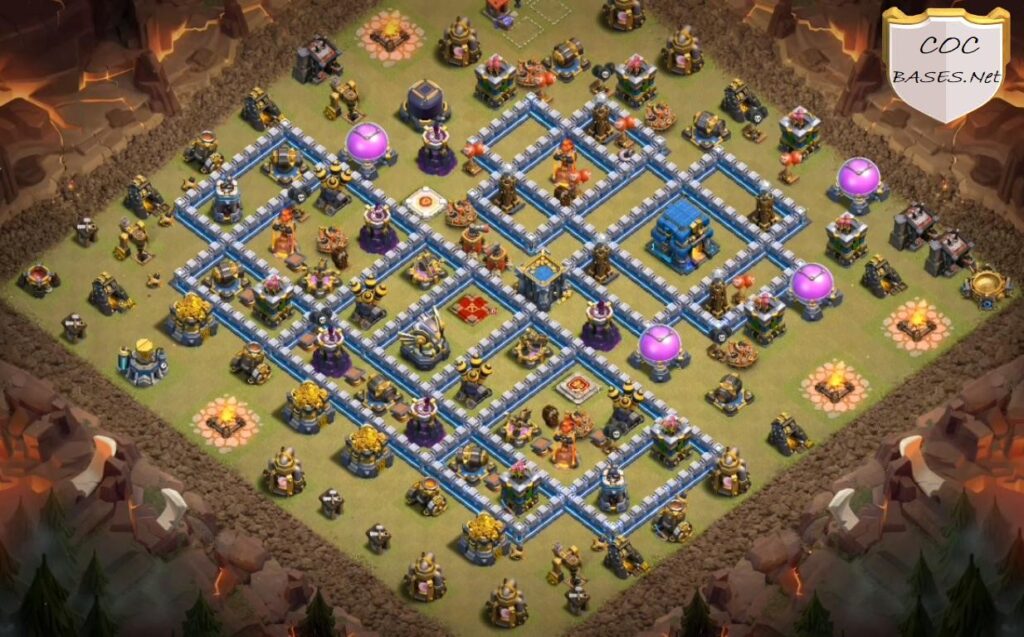 Some players want an effective th12 layout design to make you win all the wars. The Town Hall is placed in the front of the base with a half boundary of the wall and archery tower. The eagle artillery and clan castle are centralized so that opponents can’t easily destroy the base. The whole base is protected with defense buildings and anti-war towers. 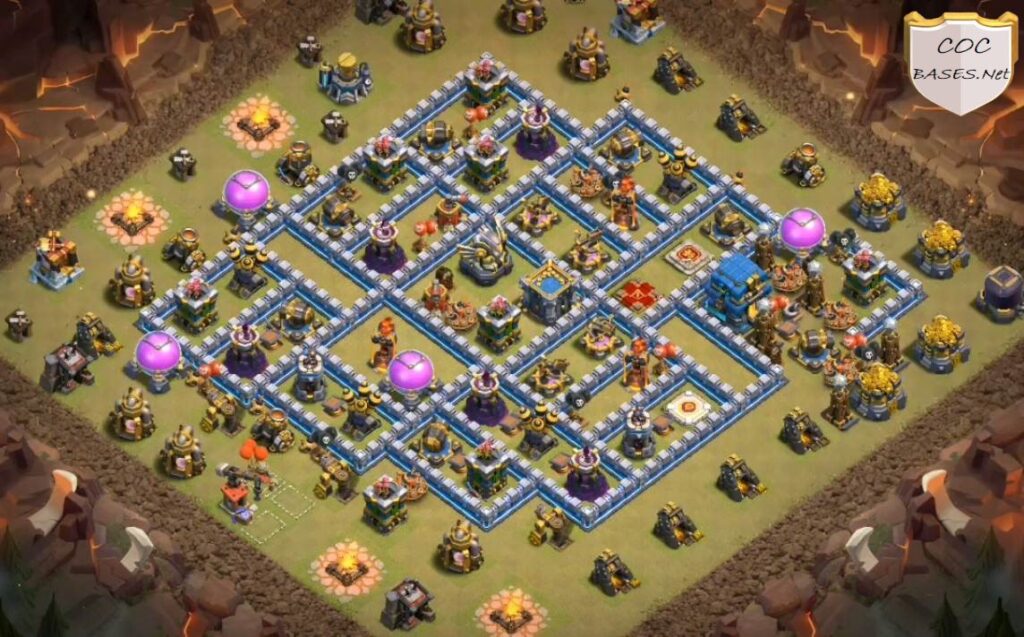 Anti Everything Th12 Hybrid Base

This is another option for players who want Town Hall in the front and is hard for the attacker to destroy. The eagle artillery is kept at the side with an air-defense tower further surrounded by the heavy wall. There are several bomb towers, archery towers, and air defense towers surrounding the whole troop. The resource buildings are placed outside the th12 base links. 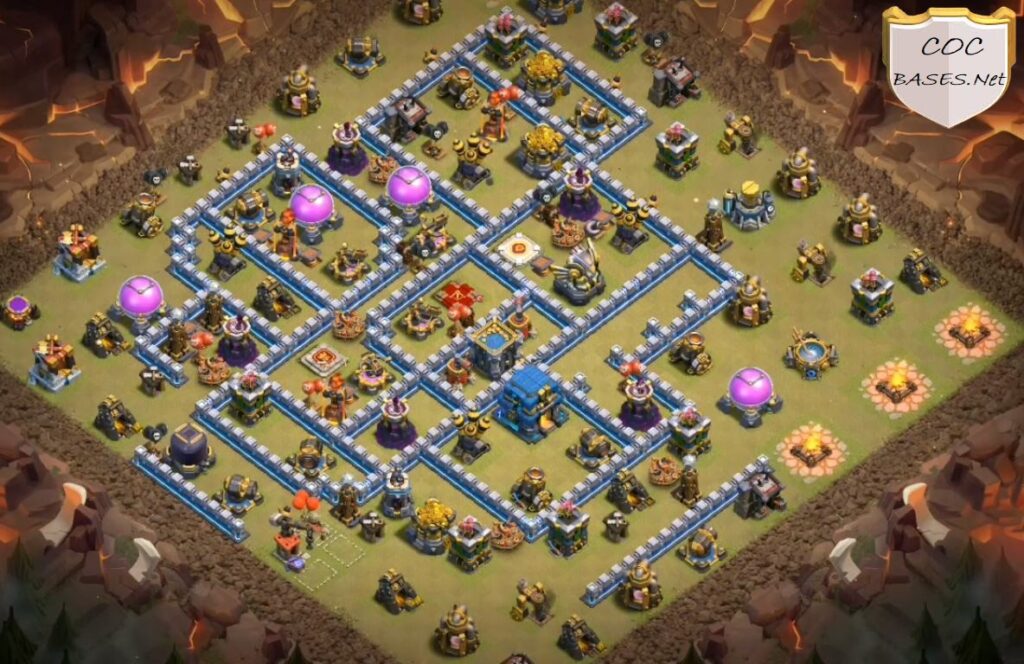